J.J. Henry has won his second Barracuda Championship title in four years by sinking a 15-foot eagle putt from the fringe on the second hole of a playoff with Kyle Reifers.

Incredibly, Reifers still had a 10-foot eagle putt of his own to extend the playoff but the breaking, downhill putt slipped below the hole to give Henry his third PGA Tour victory in his 439th Tour start.

“I knew obviously playing here that it’s kind of coming down the mountain, if you will, from the front of that green,” Henry said. “I knew there was a good chance the ball would get to the hole if I got it on line, and that’s exactly what I did. It went right in the middle of the hole.”

“I don’t know how athletic I looked when I jumped up for joy, but it’s a heck of a feeling when you make a putt like that. When you do it to win on the PGA TOUR, it is that much more special.” 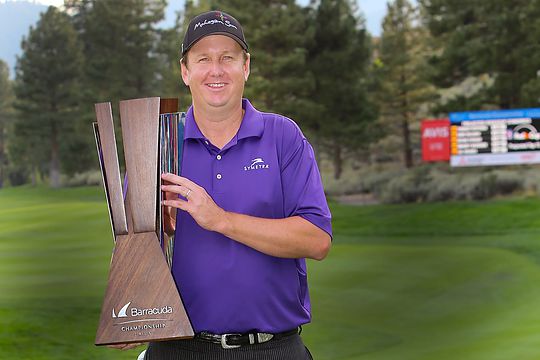 With defending champion Geoff Ogilvy missing the cut, the 40-year old emulated the Australian’s performance in 2014 to jump to 76th in the FedExCup standings, gained exemption status on Tour through the 2016/17 season and earned a spot in the this week’s PGA Championship at Whistling Straits in Wisconsin.

In the modified stableford format, Reifers fired three back-nine eagles in a 22-point round to tie Henry on 47 points in the rarefied air at Reno’s Montreux Golf and Country Club.

Playing the 18th on the first extra hole, Reifers made a 12-foot birdie putt after Henry had chipped to tap-in distance to set up his own birdie. Both players then played superb shots to set up eagle chances the second time around, with Henry sliding his left-to-right breaker into the centre of the cup.

“Just disappointed,” Reifers said. “I performed the way I wanted to. That last putt there, that was a little disappointing, but all in all I take a lot of positives out, and see if I can get back in this position again soon.”

“I know obviously how much a win would mean so it’s disappointing, but like I said, I hit the shots and the putts that I wanted to. At the beginning of the day, if you would have said I would be sitting here right now, I would’ve obviously taken it.”

Patrick Rodgers was a point further back in third place with Andres Gonzales in fourth at 43 after a 10-point final round. Former major champions David Toms and Retief Goosen finished in fifth and sixth place respectively.

Australia’s best was Rod Pampling in a tie for 29th place on 29 points ahead of Greg Chalmers (T53rd) and Robert Allenby (T59th).