Austin Bautista has secured back-to-back victories at the Federal Amateur following his stroke win over Queensland’s Charlie Dann at The Federal Golf Club in Canberra. 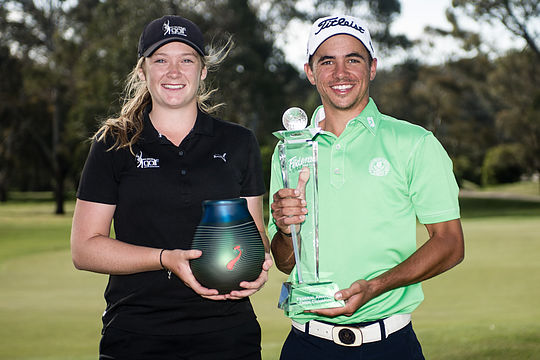 It wasn’t all smooth sailing for the Bonnie Doon member following a penalty on the 15th. At the time Bautista was leading Dann by 2 shots with 4 holes to play however a wayward tee shot on the 15th ended up unplayable against a tree trunk. It would eventually lead to a double bogey bringing the scores back to square.

At the 17th Bautista produced a brilliant 3-wood approach into the reachable par 5 leading to a birdie. Dann responded with his own brilliance with a delicate flop shot to a tightly packed front edge pin to also secure birdies with the pair heading down the 18th locked at 8-under.

When Dann’s approach caught the right green side trap he needed to get up and down to force a playoff after Bautista’s approach landed safely on the middle of the green for an easy 6-metre two putt. Dann missed his par putt while Bautista secured the par.

“It was a tough battle coming in,” said Bautista. “I had to take an unplayable on the 15th and that saw my lead evaporate. Certainly my shot into the 17th was a game winner.”

“It’s a good feeling going back-to-back because you have a lot of people out there who don’t want you to win.”

“The players want to beat the guy who won last year, so it was a good feeling to go and beat a strong field.”

This was Bautista’s third win this season following earlier victories at the New South Wales Amateur and the City of Sydney. With a start at this week’s NSW Open on Thursday, Bautista is confident that his game will see him compete well.

“I have a few professional events where I have a start and I’m looking forward to that,” said Bautista.

“I probably won’t be returning here next year to try and make it three from three, as I plan to go pro. But this has been a very satisfying week, played on a fantastic layout. That 69 I had on Saturday in those conditions will certainly go down as one of my best rounds to date. It was brutal out there and that set me up well for the final rounds.”

The minor placings were taken out with local Jordan Ayre finishing in outright 3rd position at 5-under with New Zealand’s Ryan Chisnall and Queensland’s Blake Proverbs at 4-under.

The 16-year-old had a four-stroke lead going into the final round and managed to hold off Grace Kim by one shot, with Celina Yuan another shot behind in third place.