Both Bautista and Fowler shot impressive rounds of 5-under 66 on a course that has been unforgiving to others in the field. 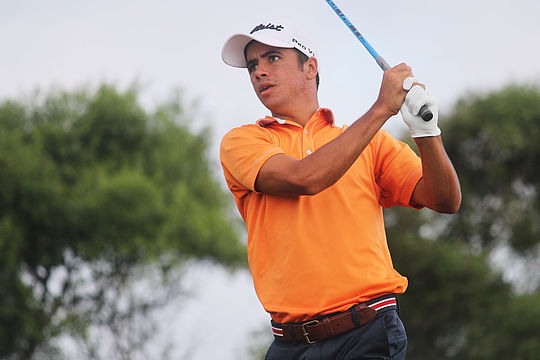 Bautista, in just his second year as a Professional, found the course to his liking while posting his early lead.

“It was a good round, I prepared well and the course suits my eye, I like the way it looks,” said Bautista, who made just one bogey for the round, coming on the 17th hole.

“This course is a shaper’s course, you’ve got to be able to work it both ways, you never get a dead straight shot off the tee especially on the back-9 with those back-to-back par-5’s (13th and 14th holes).”

“You’re hitting cut, cut and then you go to the next hole and it’s hook, hook so you’ve got to be able to do both.”

He credited his management of the course and a patient putting game for his early lead in the tournament.

A dominant force in the senior’s game, Fowler finished third on the Staysure Tour (formerly the European Seniors Tour) in 2017, but is proving once again he still has what it takes to compete with his juniors.

“To score that in the first couple of weeks of the year is very pleasing, like most of us I don’t think we’ve done much practice, I know I certainly haven’t. It was a nice fresh morning and I think we got the best of it today,” said Fowler, who opened his round at Wainui Golf Club with a birdie.

“I drove the ball well; hit a lot of great iron shots and my putting today was the best it’s been in the last 12 months so I’m pretty happy.”

Given the dry weather New Zealand has endured recently, the course this week is playing hard and fast.

“It’s particulary tricky with the bounces, if you’re a little bit off you can pay a big penalty here off the dry turf, I was lucky enough to land on a lot of the greens,” added Fowler.

Daniel Pearce was the standout performer in the afternoon field; he narrowly missed a birdie chance on the 18th hole but finds himself outright third after shooting 4-under 67.

It’s a simple game-plan for the 2017 Coca-Cola QLD PGA champion this week at Wainui.

“I played solid all day really, I hit the ball quite nicely and just tried to roll in a few putts,” said Pearce.

“I’m playing aggressive, conservative golf this week I guess you could call it, I’m hitting a lot of irons off tees I think I only hit two, maybe three drivers.

“I’m just trying to get into a position to give myself a shot at the green.”