Following a handful of top-10′s this season, Sydney’s Austin Bautista has finally snapped up his first Australian PGA Tour title with victory at the NT PGA Championship today.

Bautista carded a 10-under 61 on Friday to open up a four-shot lead before weekend rounds of 68 and 69 left him on 20-under, equalling the tournament 72-hole scoring record set by Brett Rankin in 2019, for a seven-stroke win over Queensland’s Tim Hart. 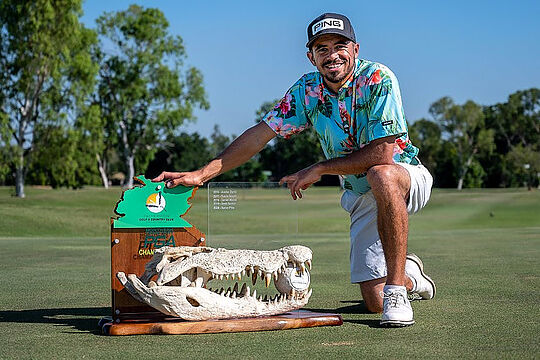 “This is my first major win so I’m ecstatic to have this one and I’ll remember that croc [trophy] forever,” said Bautista, who finished runner-up just a fortnight ago at the WA PGA in Kalgoorlie.

“I’ve played really good golf this year, I’ve just played my own game and been really consistent. I have a lot of exciting months and years ahead where I want to get some more wins.”

Defending champion Aaron Pike played in the final group alongside Bautista but with a six-shot margin between them, the local hero had his work cut out for him to catch the leader.

But for Pike, there was more on his mind than just the NT PGA. He knew there was no chance at claiming one of the top-3 spots on the Order of Merit; his goal now was to get himself inside the top-5 to qualify for an exemption into the Korn Ferry Tour Q-School at the end of the year.

The big-hitting two-time Australasian PGA Tour winner got off to a slow start with three bogeys from the 6th hole seeing his dream of playing in the US slowly slip away. Then came a birdie at the 9th along with another pair before a bogey at the par-3 14th.

With Louis Dobbelaar hot on his heels, he needed to pull off something special which he did at the 18th hole sinking a crucial birdie from just off the green to secure outright 4th place and AUD$7,500 prize money to finish just AUD$3,059 clear of Dobbelaar for the season.

The battle for the third and final DP World Tour card also went down to the final tournament of the season with Andrew Dodt holding on to third spot after finishing AUD$1,239 ahead of 4th placed Dimi Papadatos.

Papadatos, who has spent the past few years splitting his time between Europe and Australia, will now need to make a decision about whether to try his hand at the Korn Ferry Tour Q-School later this year.