Bautista takes the lead in Kalgoorlie

Following a five-year tournament hiatus, Austin Bautista has carded a bogey-free 8-under 64 to take a one-shot lead at the WA PGA in Kalgoorlie.

The Sydneysider last walked off the Kalgoorlie Golf Course in 2017 following opening rounds of 80 and 78. This time around he seems to have a better handle on the iconic desert layout. 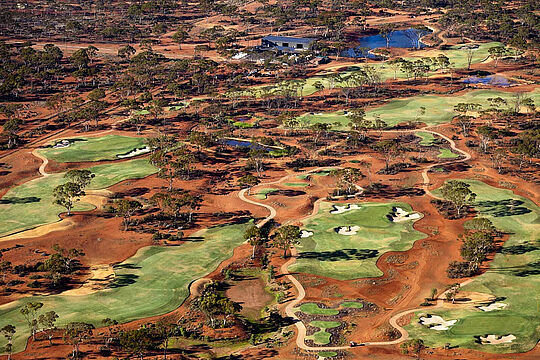 “You see the red dirt when you first roll up and you’re like, ‘Where’s the golf course?’ and then it’s pretty good when you’re on it,” said Bautista of the Graham Marsh-designed layout.

“I play a bit in Arizona and it is quite deserty but this course is different because in Arizona it’s just pure gravel where here you have some good lies. It’s so cool coming to play this course once a year because we don’t get the chance to play anything like this.”

Fellow New South Welshman Josh Armstrong sits in outright second on 7-under with Louis Dobbelaar in outright third another stroke back.

Dobbelaar sits in 6th place on the Australasian PGA Tour Order of Merit so a win here this week and the $36,000 first-prize cheque would go a long way to seeing him move inside the top three players that will earn a DP World Tour card for the 2023 season. Just $37,000 separates third (Andrew Dodt) and 10th (Jordan Zunic) places.

The WA PGA marks the third last tournament of the season with the $150,000 WA Open next week followed by the $150,000 NT PGA at the Palmerston Golf Course the final chances to claim a share of the Order of Merit spoils.