Austin Bautista has won the City of Sydney Amateur International with a one stroke victory over Mac Marr at Moore Park Golf Club.

Bautista fired rounds of 72-69-70 to finish 1-under the card to secure another amateur title after collecting the NSW Amateur and Federal Amateur this season. 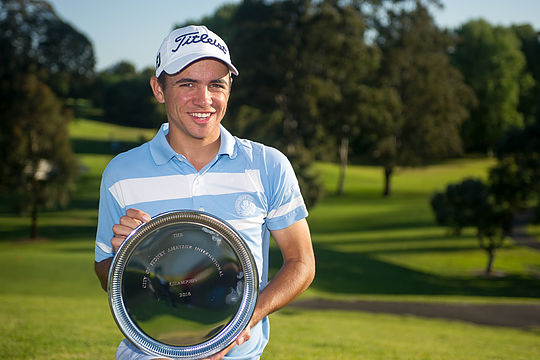 Bautista had to work hard for his victory after strong winds lashed the opening Saturday round making scoring difficult.

“It was tough out there and Saturday’s round was brutal,” said Bautista.

“Then to come back out on the Sunday to play 36 holes, this was more of a test of a player’s endurance than anything. But I’m wrapped to get another win and it sets me up well for the Keperra Bowl.”

Marr, who has just returned to Australia following a successful US collegiate stint where he finished his business degree, made his move during the closing 18 holes to be at one stage six-under the card which had him in the lead.

A costly error on the short par 5, 16th hole when Marr’s 2-iron approach flew the green and into the surrounding thick rough would result in an uncharacteristic 10, opening the door for the rest of the field to get back into the tournament.

Kevin Yuan from the Australian also had his chances after opening with a fine 71, yet a second round 74 took the wind out of his sails.

Yuan, who recently returned from playing in China, took to the last 18 holes with gusto to fire a 1-under-par 69 yet he would come up three shots short to finish in a tie for 3rd position along with Young Park from Oatlands.

“It’s always good to get your name on a trophy and to be alongside those names means a lot,” said Bautista.

In the Women’s City of Sydney International, Elizabeth Elmassian from the Australian secured victory with a two stroke win over fellow club member, Celina Yuan with June Song from Avondale in third position.