New South Welshman and former Asian Tour winner Darren Beck has taken an early lead in round one of the Isuzu Queensland Open at The Brisbane Golf Club.

Beck said he’s taken some lessons from a disappointing tournament here in 2016 and after playing the pro-am on Wednesday hatched a game plan that has clearly paid dividends.

He shot 6-under 65 on the par-71 course to check in clubhouse leader following his first 18 holes.

“I missed the cut here last year, I didn’t really know how to play the course and was hitting driver in some wrong spots,” Beck said.

“Yesterday I played the pro-am and the greens were really firm. So I wasn’t too sure how to come out this morning; either attack the flags or short of the flags and bounce up.

“I gave myself a lot of full wedge shots into the greens because I’ve been hitting those really well, so I stuck to that plan and tried to eliminate the bogeys.

“I ended up landing the ball right at the pin and holed some nice wedge shots, it was a good day and I’m happy with 6-under.” 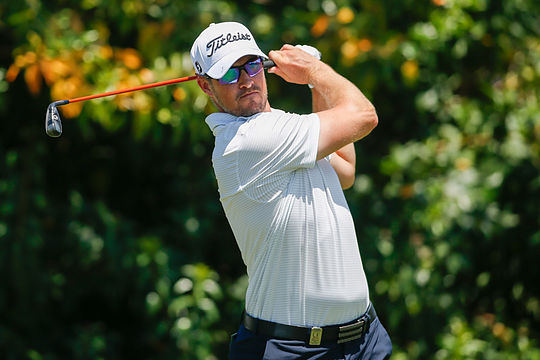 It’s been an up and down month on the ISPS HANDA PGA Tour of Australasia for Beck, after coming close in the WA PGA Championship, eventually finishing tied fifth, a missed cut in the Fiji International, third in the Northern Territory PGA Championship followed by another missed cut at last week’s WA Open.

But the Sydney-sider is upbeat after his hot start to the Isuzu Queensland Open and seeing some benefits from slight changes to his putting game.

“For me it’s just a matter of holing putts from week-to-week. Last week I couldn’t find the hole at all and this week I’ve made some slight changes in my putting routine and all of the sudden I’m seeing the ball go in the hole,’ added Beck

“I’m hitting it great, it’s just a matter of rolling some in.”

Right behind Beck and in just his second tournament as a Professional is Gold Coast local Kade McBride who shot 5-under 66 to be one shot off the pace.

The young Pro admitted he took a little while to get going and missed some scoring opportunities before catching fire just before the turn.

“I was running a lot of putts over the edges in the first six holes, I had birdie putts on every hole pretty much,” McBride said.

“I didn’t think they were coming along but then I made a good birdie on seven, holed a 15-footer and then on eight I hit a birdie then had some momentum heading in.”

McBride’s first tournament as a Professional at last week’s WA Open yielded a top-30 finish and has given the young Pro a boost in confidence for this week.

“I was pretty nervous with it being my first week, but this week I feel I’ve settled in a bit better,” added McBride.

“That was definitely my goal to make my first cut, get the monkey off my back and try to ride the momentum from there on in for the rest of the year.”

Joining McBride in second position is South Australia’s Max McCardle who landed a monster 20 foot putt on the 18th green.

“It was very nice to make that putt on the last and finish on a good note, it was a good afternoon,” said McCardle who finished his round in windy conditions.

“It was pretty tough out there; it’s hard to get the direction and the angle of the wind. The greens were quite firm, I hit a lot of good shots that bounced over greens but I played some really nice chip shots and bunker shots to keep my momentum going.”

McCardle and the rest of the players who teed off in the afternoon were threatened with ominous clouds towards the end of play but all completed their round safely under the watchful eye of ISPS HANDA PGA Tour of Australasia Tournaments Manager Graeme Scott.

The second round of the Isuzu Queensland Open tees off at 6:45am with leader Darren Beck teeing off the 10th tee at 12:05pm.