Beck’s back nine birdie-fest seals the deal in WA

It’s a tough way to win a tournament but it’s the same result in the end and Darren Beck wouldn’t have it any other way.

Beck, who plays most of his golf on the Asian Tour, overcame a 3-over start in his five holes to stage a remarkable comeback to win the WA PGA Championship at Kalgoorlie Golf Course. 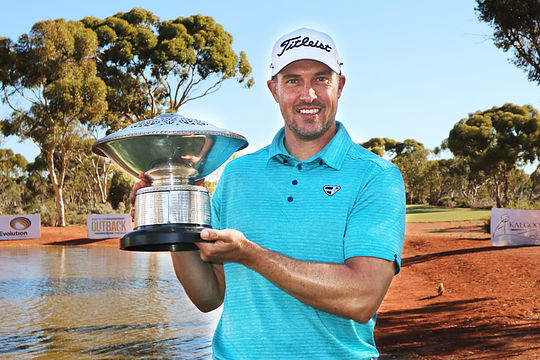 Beck began the day with a one-shot lead over Jarryd Felton but quickly ran into trouble and it looked like the tournament might have been going Felton’s way.

However six birdies across the back nine holes, including three in a row from the 16th, helped the 41-year-old claim his first Australasian PGA Tour victory since 2008 and secure exemption through to the end of 2020.

“It feels great. It was a little nerve-wracking five or six holes in,” said Beck after his win.

“There was a big change in scores. I birdied the 12th (hole) and Felts (Jarryd Felton) bogeyed so it quickly turned around. I thought I was playing for second for a while there.”

“It just feels good to keep it together and finish the way I did. The putter was just unbelievable so I can’t explain how good that felt.”

The Sydney-sider closed with a 3-under 69 and two shots clear of Western Australian Jarryd Felton at 14-under.

“It feels good and you’d take second place at the start of the week but I don’t know how many in front I got there at one point,” Felton said.

“I felt like I had a pretty decent lead but I think Darren had about eight putts on the final nine holes and there’s nothing I could do about that.”

“He finished with 6-under for that nine and I shot square but the end result is what it is.”

Beck and Felton will now head to Cottesloe Golf Club for the WA Open starting this Thursday before the Victorian PGA Championship at RACV Cape Schanck on the 24th October.

Michael Sim, a 4-time winner on the then-Web.com Tour, secured third place following a final round 5-under 67 for a total of 12-under.