Belgium has withstood a late charge from Australia’s Marc Leishman and Cameron Smith to win their first World Cup of Golf at Melbourne’s Metropolitan Golf Club.

The Australians had a string of three straight birdies on the back nine to mount a spirited charge for the title but Belgian duo Thomas Pieters and Thomas Detry held their nerve for a three-shot win, with Mexico also tying for second.

Starting the final day with a five stroke buffer, both Pieters and Detry held their nerve during the alternative shot foursomes and their history of playing junior golf together was evident as the pair combined brilliantly and were at ease playing the challenging format. 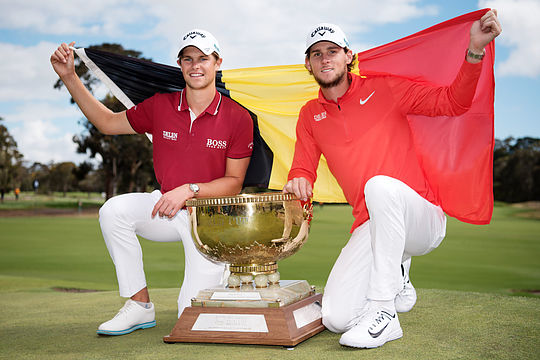 “We used to play junior events back home. We kind of grew up together playing regionals, practiced together and then were in the national team together, then he went to college in America and I followed him.”

“Today’s win feels good. It’s not something you put on your list. It’s been a long time since I won and this feels as good as an individual title. I’m very, very happy.”

The Aussies had the vocal home town Melbourne fan base pushing them all the way until the end.

World No.21 Leishman, the highest ranked player in the field, missed a short birdie putt on the 16th which would have put them within one shot of the leaders. The sound of disappointment was heard throughout the course. Yet in true Aussie spirit Smith and Leishman continued to battle and when Smith also missed a birdie putt on the 17th their fate was sealed.

“We put up a good fight,” said Leishman.

“We fought it out on Friday. You know, to come back from 6 or 7 over at one point, I can’t remember, but to fight back like that and keep ourselves in it, and to have a good day yesterday in the four-ball and then it was pretty good to get off to a solid start today and we did that”

“Obviously we would like to have been one better, but you can’t win them all and I think we did ourselves proud.”

Smith was also equally happy with the way the Australian team bounced back into contention.

“We had to make a run for it,” said Smith. “We showed what we could do it as a team. Overall, Marc and I combined well today and gave each other opportunities. Just that we came up short. That happens but the Belgians played well and were too strong.”