Belmont prevails in a tight contest

It must be the fresh sea air up Belmont way.

Because the veteran golfers thrive on it.

Belmont has won the Super Senior Pennant competition for 2011 after rallying to defeat Cabramatta in a nail-biter at The Lakes Golf Club. 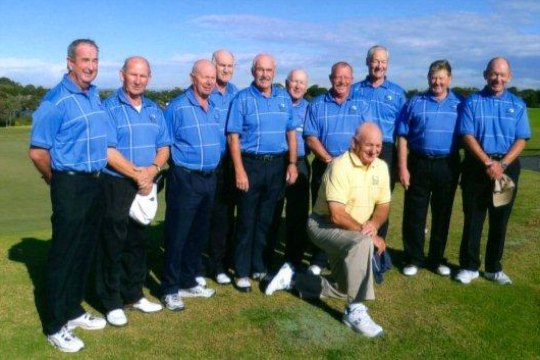 Belmont were worthy winners of the 2011 Super Seniors

The 2011 competition was one of the best yet with 49 teams from Wollongong in the south to Hawks Nest in the north contesting this terrific competition.

As mentioned in The Golfer Pacific’s recent article, the semi-finalists came down to a battle of west with Oatlands versus Cabramatta and a battle of the beaches, with Wollongong taking on Belmont.

The finalists then came down to Belmont, who defeated Wollongong 5-2 at Oatlands, and Cabramatta, who downed Oatlands 4-3 at Bankstown.

So the excited finalists headed for The Lakes Golf Club, where Belmont prevailed in a tight event by four matches to three.

Cabramatta was actually leading after nine holes, but Belmont eventually prevailed to win the Pennant.

Now its all systems go for 2012 with the annual general meeting of the Super Senior Pennants held at Asquith Golf Club.

The good news was the existing committees were elected unopposed for the 2012 season.

The meeting unanimously elected Jim Earl and Ron Kirby (past secretary/treasurer) as life members of the Super Senior Pennants for their outstanding contributions to the development and running of the organisation since its inception in 2002.

The meeting also endorsed the following changes to the rules for the 2012 season:

Things are also moving along nicely for next season with the 2012 competition scheduled to begin on March 12 and concluding in the last week of May or the first week of June.

The Super Seniors Championship is scheduled to be played on July 5, 2012 at Toukley Golf Club.