Sure Jim Furyk might never be rated in the same’ street’ as Ben Hogan when it comes to Ryder Cup captaincy.

Yet the American Ryder Cup skipper, who just received the thrashing of his life from the European team at the 2018 Cup played just outside of Paris, could certainly have learned something from a quick read of Hogan’s famous 1967 pre-Ryder Cup speech. 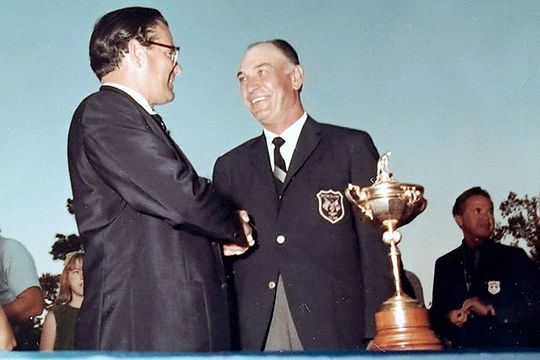 American golf analyst Brandel Chamblee shared some of Hogan’s famous speech and it’s well worth repeating…even if Furyk didn’t take any notice of it.

“Boys, there’s nothing to being the captain of the Ryder Cup,” Hogan famously told his players.

“You guys are all great players. Pairing is really easy.”

“And the first ball’s going to be hit by Julius Boris ‘cause he don’t give a s… about anything.”

Hogan even managed to add some choice words about the Ryder Cup outfits that had been chosen for them:

“You got these uniforms here,” he said.

“If you don’t like the way they fit or whatnot, don’t wear them. I never could play in somebody else’s clothes.”

“Doug Sanders, if you want to come out here and dress like a peacock, that’s fine. Whatever you want.”

“But let me tell you boys one thing – I don’t want my name on that trophy as a losing captain.”

If that didn’t inspire Hogan’s team of stars to perform then nothing probably would.

Hogan also saved some choice and well-chosen words for introducing his team to the crowd that year too:

“Ladies and gentleman, may I introduce the finest golfers in the world,” Hogan famously spruiked.

You can imagine how the British golfers must have felt after their captain Dai Rees had just gone through a player-by-player rundown.

Suffice to say the US went on to score a 23½-8½ victory…the largest margin of victory in Ryder Cup history.