It was billed as the clash of the titans with a swag of the world’s top players heading to Fort Worth, Texas to compete in the first PGA Tour event in almost three months.

With the final round spotlight firmly on the likes of Rory McIlroy, Justin Thomas and Jordan Spieth, it was left up to the lesser lights to make their mark…and they did just that.

The leaderboard ebbed and flowed all day long with Collin Morikawa, Daniel Berger, Xander Schauffele, Bryson DeChambeau amongst a long list of players, who put themselves into a position to take the crown at this historic tournament.

However, it was 27-year-old Daniel Berger who prevailed in the end, after defeating Collin Morikawa on the first hole of a two-man playoff to secure his third PGA Tour title and his first since the 2017 FedEx St. Jude Classic.

While Berger had a poor year in 2019, finishing in 131st place in the FedExCup and losing his card after a season plagued by injury, the Florida-native has made the most of his medical exemption this year, working hard on his game to finish inside the top-10 in his last three tournaments.

“I think when I won my first couple times, I took it a little bit for granted thinking that every year it was just going to be easy and you’d have that chance to win, but it’s tough out here,” said Berger.

“It’s cutthroat, and the best players in the world every week are showing up. I worked my butt off the last year to be in this position, and I’m just glad it all paid off.” 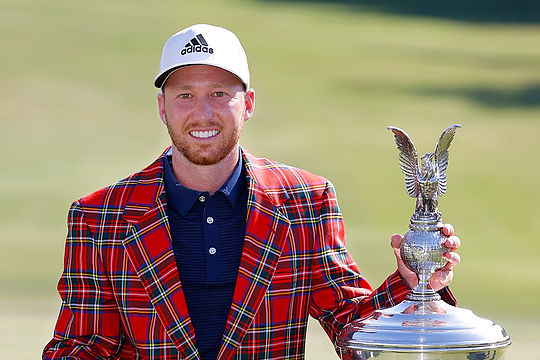 “It was a hard-fought battle today, and I just kept telling myself, why not me.”

“From the beginning tee shot to the end, and some things went my way, obviously; a couple missed putts here and there for Collin. But in the end, it was a great week, and I’ve been playing some great golf for the last couple months, so I’m just excited to be back.”

Morikawa was understandably less enthusiastic about the result.

“I know I’m going to have to look back at it before next week and see all the positives, but I’m also going to have to nit-pick what I did wrong this week because I wasn’t playing amazing. I was hitting every fairway and I had full control over my tee shots. So it’s going to be something I just have to figure out. But this one bites a little harder,” said the 23-year-old, who is in just his second year on the PGA Tour.

One man, who looked like he might romp home with the title today, fell away again in the final round and will be searching for answers as he heads back home to Florida.

Following an opening round 68, McIlroy had put himself right into contention with a second round 63. A 69 on Saturday left him inside the top-10 and staring at his 19th PGA Tour title if everything went his way on Sunday.

However, it wasn’t to be, with the World No.1 bogeying the first hole before dropping another five shots on the front nine and tumbling down the leaderboard in the process.

The 31-year-old was able to regroup on the way home with three birdies and a lone bogey leaving him in a share of 32nd place.

“I got off to a really bad start…and then the wind was up today. You didn’t have to be that much off for it to sort of show, and I missed a couple of greens in the wrong spots and made bogeys.”

“The front nine I just got into a rut and played a bad run of holes, and obviously that put me out of the tournament.”

The news was just as bad for the Australians in the field with Matt Jones the lone player to make the weekend cut and finishing in equal 38th.

John Senden, Cameron Davis, Marc Leishman, Cameron Smith and Jason Day will have plenty of work to do before heading to this week’s RBC Heritage.