Daniel Berger captured the AT&T Pebble Beach Pro-Am title with a 18-under total for his fourth PGA Tour victory following an impressive final round of 7-under-par for a two stroke win over Maverick McNealy.

Berger won for the second time since the PGA Tour returned to golf from the COVID-19 pandemic, beginning with a playoff victory at the Colonial last June.

Overnight leader Jordan Spieth went from a two-shot lead to a three-shot deficit through six holes, before birdies on the last two holes saw him close with a 70 to tie for third with Patrick Cantlay.

Spieth is winless since his 2017 Open Championship victory at Royal Birkdale but has been looking in impressive form the past couple of weeks.

Berger’s final round 65 was certainly impressive and at the famed 18th hole at Pebble Beach, he nailed his drive to the centre of the fairway before reeling off a perfectly executed 225 metre 3 wood to centre of the green and then draining a 19 metre eagle putt for victory.

“I feel like I got a little bit of revenge on the 18th,” said Berger. 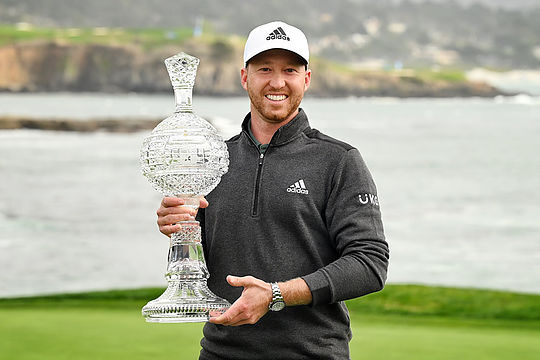 “I knew it was going to be a tight finish and I just stepped up there and hit a great drive and hit maybe the best 3-wood I’ve ever hit in my life and the putter was just kind of icing on the cake.”

“It’s so hard to win out here. I feel like everything has to come together to win and I was able to do that this week.”

Berger played college golf at Florida State University before turning professional at 20 years of age. In late 2013, he qualified for the Web.com Tour and played four events.

The following year, he finished tied runner up at the TPC Stonebrae Championship before going on to to be ranked 15th in the season-long Web.com Tour standings, which earned him a promotion to the PGA Tour for the 2014–15 season.

Berger’s three other PGA Tour wins include back-to-back trophies at the 2016 and 2017 St Jude Classics and the 2020 Charles Schwab Challenge. His best result in a major so far was 6th at the 2018 US Open at Shinnecock Hills Golf Club.

Jason Day finished the best of the Australians in a share of 7th position at 13-under-par, five back from Berger.

Former World No.1 Day, like Jordan Spieth, is fighting for a return to form and has looked impressive over recent weeks.

“I feel very positive and I feel like things are moving in the right direction for the first time in a long time.

Cameron Davis also had a solid tournament firing a closing 68 to move up six places finishing in a share of 14th position for another top-20 result adding to his finishes at The American Express and the Sanderson Farms Championship.

Cameron Percy finished in a share for 21st, Matt Jones was in a tie for 34th, with John Senden sharing 39th position.

Pat Cantlay’s tied 3rd result vaulted him to number one on the FedEx Cup ladder following a victory at the ZOZO Championship and a runner-up at The American Express. Cantlay will head to his hometown tournament this week at the Genesis Invitational at Riviera Country Club, where he will be one of the heavy favourites.