The in-form Christiaan Bezuidenhout is heading to this week’s season-ending DP World Tour Championship looking to make it three wins in succession after waltzing his way to a five-shot success at the 110th South African Open.

The 26-year-old began his final round with a five-shot advantage over Welshman Jamie Donaldson, who cut the deficit to two before the turn as the South African struggled to make an impact on the scoreboard at the Gary Player Country Club in Sun City. 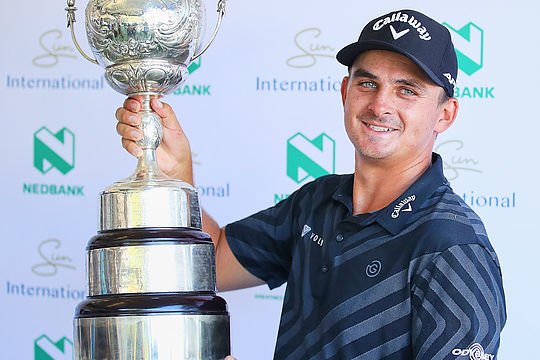 But Bezuidenhout regained his form on the the back nine to sign for a 69 and finish on 18 under par overall to seal his third European Tour title of the season following his win at the Dimension Data Pro-Am in February and his magnificent four shot victory at the Alfred Dunhill Championship just seven days ago.

Bezhuidenhout has jumped from 41st in the world to around 32nd and also rocketed to fifth on the Race to Dubai and has a strong chance of making it three wins in successive weeks.

“I fought hard today, the front nine things didn’t really go my way and I just dug deep to come out with a win today.”

What’s In The Bag – Christiaan Bezuidenhout

“That was massive (birdieing the 10th, 11th and 12th holes). I have to say, the second putt on 11 was huge and obviously the putt on 12 was a bonus, I just tried to get it close inside a couple of feet and made it.”

“I knew I had to make pars coming in and I did it. I’m really, really chuffed to stand here as a winner.”

He is the first player since Justin Rose in 2017 to record consecutive European Tour victories.

Donaldson sealed second place thanks to his round of 69 for a 13 under with South African Dylan Frittelli two shots back in third and compatriot Dean Burmester in fourth at 10-under.

Austin Bautista was the lone Australian in the field and made the trip worthwhile with a share of 40th place.