South Africa’s Christiaan Bezuidenhout has claimed victory at the Andalucia Masters in Valderrama for his first European Tour title and in the process a place at the Open Championship later this month.

The 25-year-old finished the event on 10-under-par, winning comfortably from a group of five players, who ended the tournament six shots behind. 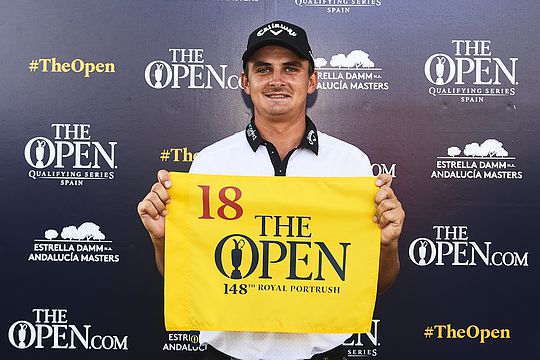 It’s been a long road to the big stage for the South African. At the age of two he mistakenly drank rat poison, which led to him developing a stammer that caused him to suffer anxiety.

The beta blockers he took to help with his stammer led to him failing a doping test at the 2014 British Amateur and while his original two year ban was later reduced to nine months, he missed out on a once-in-a=lifetime chance at representing his country at the Eisenhower Trophy.

Bezuidenhout’s season certainly has seen solid performances where he finished second behind compatriot Justin Harding in the Qatar Masters earlier this season and arrived in Valderrama on the back of a tie for third in the BMW International Open in Munich.

Victory looked assured after he extended his overnight lead to seven shots thanks to birdies on the first two holes, but bogeys at four of the next five saw Bezuidenhout’s lead cut to three before a hat-trick of birdies from the ninth effectively sealed the win.

“I’m proud of myself for hanging in there today after a tough stretch in the middle of my round,” said Bezuidenhout.

“I had a tough stretch in the middle of my round from five to seven. I made a great save on eight which just kept the momentum on my side and I bounced back with three birdies in a row. That just settled me down nicely, I just had to keep on hitting greens and the rest will take care of itself.”

“I was nervous. It’s a tough golf course, anything can happen, especially those last three holes playing into the wind. I’m really pleased with the way I played and to finish it off is unbelievable.”

Tournament host and home favourite Sergio Garcia finished a shot further back in seventh which moves him up to 17th from 20th in the Race to Dubai Rankings.

Min Woo Lee secured an impressive top-25 finish and in the process secured his status on the European Tour for the remainder of the year.

Tied for 44th heading into the final round, Lee made two birdies and one bogey on the back nine to move up 21 spots on the leaderboard, the €32,100 in prize money enough for him to surpass the number required to receive unlimited invitations into tournaments for the rest of 2019.