Sometimes you need a little bit of luck to go your way and South African Christiaan Bezuidenhout certainly had his fair share on the way to winning his second European Tour title at the Alfred Dunhill Championship at Leopard Creek Country Club on Sunday.

The 26-year-old birdied three holes on the back nine to finish four shots clear on top of a crowded leaderboard for his first European Tour win since the Andalucía Masters in June last year.

Bezuidenhout becomes the fourth South African winner on the European Tour this season and will move inside the the World’s top 50 and to 9th on the all-important Race to Dubai, which wraps up in just two weeks time.

“It’s incredible. This tournament has been close to my heart since I played it for the first time. It’s always been a tournament I wanted to win and to pull it off today is really, really special to me,” said Bezuidenhout, who finished on 14-under following rounds of 69, 68, 68 and 69.

What’s In The Bag – Christiaan Bezuidenhout

“I’m proud of myself to stick in there and to have pulled it off round here.” 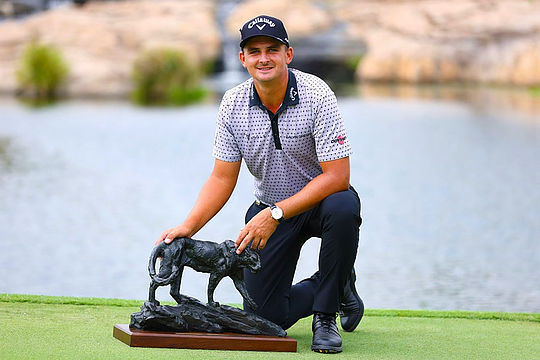 However it was American Sean Croker, who might take top honours for helping to hand victory to Bezuidenhout.

Zimbabwe-born Croker, who was just one shot off the lead heading up the 18th, crumbled under the pressure putting two balls out of bounds for a triple-bogey 8 and a round of even-par 72.

While the 24-year-old missed out on a trophy, the second place finish was enough to move him up 32 places to 60th on the Race To Dubai and at this stage qualify him for the season-ending DP World Tour Championship in Dubai on December 10.

Only one Aussie has made the trip to South Africa and so far for Scott Hend it’s been back to back missed cuts at the Joburg Open last week and again this week following rounds of 74 and 76.

The 47-year-old will need a small miracle this week if he is to make it into the top-60 in time for Dubai.

“Thank U #DunhillChamps @Sunshine_Tour @LeopardCreekCC @EuropeanTour for a frustrating week yet amazing in so many ways. My 1st visit to this amazing facility and won’t be my last. It got the better of me this time, but I’ll come back stronger. Thanks South Africa,” tweeted Hend.