The final round of the 2018 Fiji International presented by Fiji Airways was a show worthy of the stage, India’s Gaganjeet Bhullar edging out a white-hot Anthony Quayle to win at Natadola Bay Championship Golf Course.

His 14-under total proved to be one shot too many for Queenslander Quayle, the 23-year-old’s astonishing 9-under 63 enough for a new course record but not the Sunday silverware.

The par-5 17th has been Natadola Bay Championship Golf Course’s most vulnerable hole this week and it was the scene of the best entertainment late in the day, Quayle and Bhullar draining back-to-back eagles to set up thrilling final round finish.

Quayle snatched the lead at 13-under par – capping off an unconscious stretch of nine gained strokes in 13-holes – with a brilliant three at the par-5.

But Bhullar responded right away, the 30-year-old snatching back the lead he held overnight with a 40-yard chip-in from in front of the green just moments after the Australian hit the clubhouse.

That saw the World Number 163 leapfrog Quayle and regain the lead, a par up the last ensuring a one-stroke victory and a fourth Asian Tour title in three seasons. 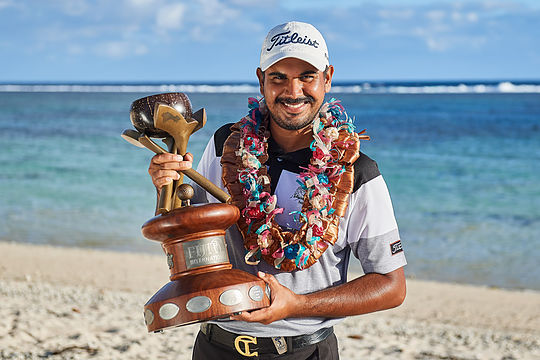 “To be honest, I was mentally prepared for that,” Bhullar said of Quayle’s unbelievable final round.

“I knew somebody or another had to go low today. Even Ernie Els, he’s a legend, he was playing really well.”

“I still had hopes, I still had kind of a feeling that I can still win the tournament, but I think that chip‑in on No. 17, that pretty much closed the deal.”

The winning chip was one Bhullar had seen before, the champion telling the media after the round he had a similar shot in Friday’s second round.

“To be honest, I was in pretty much the same situation, same place on day two and the flag was pretty much on the same side of the green,” said Bhullar.

“I had a little bit of an idea that this chip is going to run a lot, but it wasn’t an easy chip.”

“I could have easily missed the up-and-down and settled for second or third.”

But a run-in with tournament host and local legend Vijay Singh last night had Bhullar dreaming only of winning on Sunday.

“We just bumped into each other,” said Bhullar.

“He said, ‘Son, you’re ready to win this tournament, just be aggressive, give 100 per cent and the golfing gods are going to be on your side’.”

Bhullar began the day one-shot clear of the field and despite typically blustery conditions, the Indian fired his best score of the week when he needed it most.

And while the wedge at 17 will be credited for helping the Indian to victory, brilliant pars at 10 and 11 were the catalyst for Bhullar’s back nine surge.

With Bhullar, Quayle, Kiwi Ben Campbell (66), Jarryd Felton (69) and a threatening Ernie Els (65) all within two shots of the lead, the Indian saved par from the fringe to kick start his back nine, before holing another bomb on 11 to avoid dropping a shot.

“I think that was a turning point,” said Bhullar.

“That gave me a boost, a lot of confidence. After that, it was just one shot at a time and I was just able to execute. It was a tough day. It was windy, flags were tough, but I played really well.

“I gave myself many, many opportunities today.”

Four-time major champ Els didn’t waste any time in adding his name to the mix on Sunday morning, the South African holing out with a greenside chip for eagle on the par-5 first, before backing that up with a birdie on three.

Suddenly Els was at 8-under for the week and within one of the lead, but a wayward drive into the breeze at the 5th resulted in bogey and a crippling loss of momentum.

The headline act lived up to his billing with a third-placed finish – his first top 10 anywhere in the world since June, 2016 – alongside Campbell, who led the way all week and made great strides in locking up his Asian Tour card for next season.

“I did almost as much as I could,” said Els.

“I set out to try to shoot 65, which I did, and Anthony just played unbelievable. Jeez, what is it, 29 on the back nine? That’s unbelievable stuff.”

“Great golf and well deserved. Whoever wins, they deserve it because it’s great golf.”

West Australian Felton rounded out the top 5, joining Bhullar as the only other player to break par in all four rounds.