The big-hitting duo of Sweden’s Henrik Stenson and American Dustin Johnson burst into a share of the lead with course record setting five under par 65s on the par 70 layout to take the clubhouse lead at the US Open Championship.

The effort lowered the prior course record by three shots set by American Patrick Reed with a 68 during the course of the 2010 U.S. Amateur. 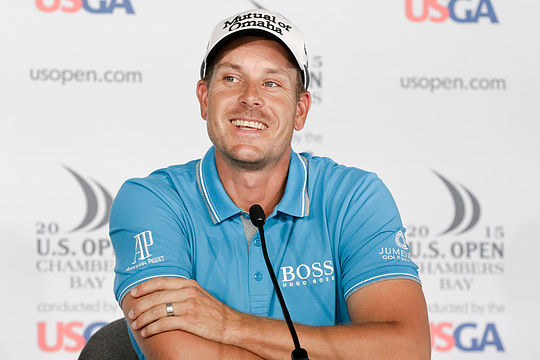 Stenson has finished inside the top 21 in eight of the last nine Major Championships as he seeks his first win in one of the game’s biggest four events.

And a 20 foot birdie on the 18th boosted his chances as a five under par 65 left him tied with US Ryder Cup star Johnson at Chambers Bay.

The pair were two ahead of Americans Matt Kuchar and Patrick Reed, with Italy’s Francesco Molinari part of the group on two under following a 68.

“It was a good day,” said Stenson, who came home in 31. “I was striking it nicely, which led to a lot of birdie opportunities for me.

“I felt like I was really keeping my patience and a level head out there and very focused on the things that I wanted to be focussed on.”

“I hit some beautiful putts and managed to slip a few in there. It was a good way to finish the day.”

“One day out of four done, and we’re right there with where we want to be. It’s still a long journey until Sunday afternoon, of course, but a good start always helps.”

Johnson had started his round on the back nine and carded birdies at the 11th and 12th before picking up further shots on the first, fourth, fifth and seventh.

The 30-year-old, who overturned a five shot deficit in the final round to win the WGC-Cadillac Championship in March, had needed to birdie the last two holes to record the first 62 in Major Championship history.

But having scrambled par on the eighth after a miscued chip, he bogeyed the ninth after failing to get up and down from the edge of a bunker.

World number one Rory McIlroy struggled on the greens as he carded a two over 72, but Colin Montgomerie completed a superb 69 that was matched by fellow 51-year-old Miguel Angel Jiménez.

Phil Mickelson was left to rue a missed opportunity despite making a solid start in his bid to complete his career Grand Slam.

Mickelson, who has finished runner-up a record six times, was among the early starters and took advantage of flat calm conditions to reach the turn in three under par.

However, the five-time Major winner then carded three bogeys and one birdie on the back nine to card an opening 69 to finish one under par.

“I played well,” Mickelson said. “I had a really nice round going and then made bogey on 13 and 14. I think the 13th is the hardest approach shot into the green. I did not leave myself the best shot and was way too far back and then made a good bogey on the next.”

“(But) no complaints. I’m under par in the first round of the US Open and I am pretty pleased.

“I thought it was a very fair test. The set-up was good. I think everyone in the field is going to struggle with three to eight foot putts when they are downhill because you can’t hit it hard enough to hold the line and there is a lot of wiggle.”