Big names out of Australian Amateur

It was a day of carnage for some of the biggest names following the opening match-play round of the Australian Amateur at Woodlands Golf Club in Melbourne, Victoria. 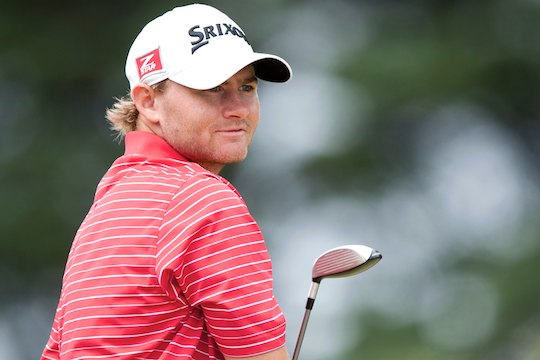 Defending champion, Matt Stieger, remains in contention at the Australian Amateur making his way to the second round at Woodlands (Photo: Anthony Powter)

Higginbottom came into this championship on the back of impressive results in professional events he had played this summer, including a runner-up finish at the NSW Open.

However, Andrew Collins put an end to Higginbottom’s championship aspirations with a 1-up win.

In a promising sign of things to come, defending champion Matt Stieger won 2&1 over Rory Burke to set up a second round match-play encounter with Germany’s Sebastian Kanner.

Oliver Goss failed to follow on from his stellar performance last week at the Master of the Amateurs, going down 2&1 to Christopher-John Harrop.

Nathan Holman, a four-time winner on the Australian amateur circuit is through to a second round encounter with Ruben Sondjaja after Holman accounted for Daniel Pearce, 4&2.

The manner in which the draw has panned out potentially has Holman meeting New Zealand’s Ben Campbell in the third round. Earlier Campbell accounted for Tasmania’s Cory Crawford, 2&1.

Campbell, who has been runner-up in this championship on the last two occasions, will play fellow Kiwi, Blair Riordan, in tomorrow’s second round.

Todd Sinnott also progressed through to the second round defeating Moe Nagi, 3&2.

Loughrey will play top qualifier, Queenslander Cameron Smith, in what promises to be one of the biggest matches of the top-32.

D.J. Loypur, the opening round leader last week at the Master of the Amateurs, secured the day’s biggest victory with a 7&5 win over Joshua Cabban.

With the way the draw has evolved there is no easy pathway to the final, even with the big names of Higginbottom, McCarthy and Bourke out of the championship.

Stieger remains dangerous and is a tenacious match-play exponent.

Positioned in the upper half of the draw along with Holman, Smith, Loughrey and Sinnott, Stieger has back-to-back victories in his sights. It promises to be a corker of a few days at Woodlands.

New Zealander Mathew Perry is positioned well in the lower half of the draw and has a real chance to claim both the Australian and New Zealand Amateur crowns. A feat last achieved by Matt Jager in 2010.