Ashley Hall, Cameron Smith and Aaron Baddeley each had their own reasons to be disappointed with the end to Sunday’s tumultuous final round at the Emirates Australian Open at Royal Sydney, but the trio enjoyed the consolation of knowing they will be teeing it up at golf’s oldest major championship next year.

With three spots for the 2017 The Open Championship at Royal Birkdale on offer, both Hall and Smith were confirmed starters before their playoff with Jordan Spieth began. 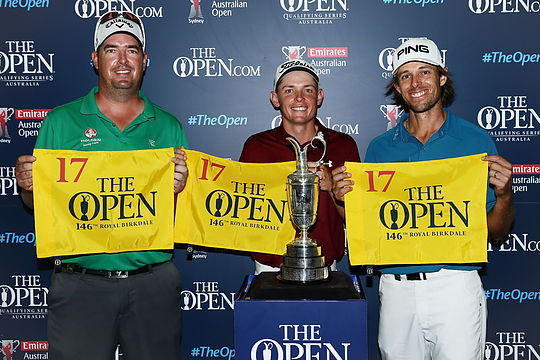 Baddeley, who endured a frustrating day on the greens in search of his third Australian Open title, shot a one-under 71 to tie for 4th place at 10-under with overnight leader Geoff Ogilvy, Rod Pampling, Jason Scrivener and Ryan Fox.

He took the third and final spot courtesy of having the highest world ranking of that group.

Hall will be playing in his second Open Championship having made his debut in 2012 at Royal Lytham.

“It’s great. I love Birkdale. I played The Amateur Championship there in 2005 so it’s nothing new to me.” he said, “I love links golf. I love the way they play and it’s just a different way of playing golf.”

Smith commented before and after the playoff that he was excited to play The Open as it’s the only major championship he was yet to play in.

“It’s awesome.That’s the one with all the history so I’m looking forward to getting over there to see what I can do.”

Baddeley will be making his 8th start in The Open and was thrilled to be able to lock down his first major start for 2017 at Birkdale.

“It’s super exciting. I wasn’t in any of the majors starting the year so being able to plan that I’m going to Birkdale is pretty exciting.”

“It’s a different style of golf. I remember talking to Greg Norman about it and he was saying to just remember that golf is designed to be played on the ground with links golf.”

“It’s also the atmosphere and the fans, they really understand good shots. It has such a unique atmosphere so I’m just super excited.”