World number one, Rory McIlroy has won his first WGC Match Play title with a 4&2 victory over America’s Gary Woodland.

Despite a slow start with a number of three putts on the opening holes, the 26-year-old was able to gain his momentum winning four holes in succession to go to the turn four up.

However, Woodland countered at the start of the back nine and wins on 11 and 12 cut the deficit to two. On the 13th, Woodland missed a five foot put that proved costly with McIlroy taking full advantage by winning the 14th to return to three up from where he closed out the match 4&2 on the 16th green.

“I’m really proud of myself with how I showed a lot of character early in the tournament coming back from some deficits,” said McIlroy at his post final interview.

“Obviously I am delighted, a second World Golf Championship and first win in the States this year and so I could not be happier.” 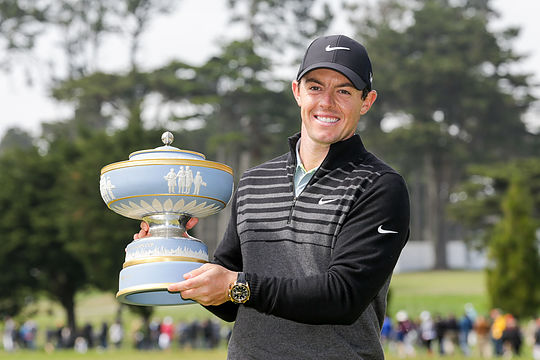 The victory is McIlroy’s 10th US PGA tour win and second WGC title after claiming the 2014 WGC-Bridgestone Invitational with a two stroke win over Sergio Garcia.

McIlroy now holds half of the current WGC/major championships and has joined Tiger Woods and Jack Nicklaus as the only golfers in the modern era to win 10 or more PGA Tour events before turning 26 – which McIlroy turns today.

In the consolation match, England’s Danny Willett beat Furyk 3&2 to secure third prize in the tournament.

John Senden was the best-placed Australian in a tie for fifth after losing his quarter-final to Woodland on Saturday. Defending champion Jason Day and former world No.1 Adam Scott did not make an impact at the event.

Scott was beaten 1-up by England’s Paul Casey while Day was beaten 4&3 by South African Branden Grace on day two to fall to 0-2 in pool play, leaving the Aussies ineligible for the weekend.

Marc Leishman and Matt Jones were the other Aussies to progress past pool play, with Leishman making the round of 16 before losing to Woodland and Jones falling just short of the top-16.