A packed crowd gathered around the 18th green and spilled onto the last fairway of the famed Old Course to sing ‘Happy Birthday’ to the 34-year-old Englishman who won by two shots with a closing 68 for an 18-under par tally. 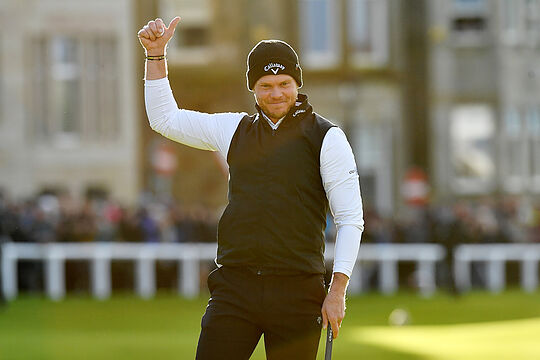 It is Willett’s eighth European Tour success and his first in just over two years while it’s a first in Scotland finishing clear of Sweden’s Joakim Lagergren (66) and former double Dunhill winning Tyrrell Hatton (67).

Willett, a father of two, was close to tears following his victory.

He said: “Hearing everyone sing ‘Happy Birthday’ was great and that has to be a first on the Old Course.”

“It’s just great to win again because it has been a very unfortunate last eight months, really. Every time the game feels like it’s been in a nice place, we’ve had a couple of things, issues with health, just things that you can’t really avoid.”

“We’ve had COVID, wisdom teeth problems, appendix issues, they’re not things that — they are just things, and they seem to have knocked us back a peg or two, and never really been able to get the momentum going in.”

“This one, for everyone watching, this seems quite out of the blue, but the practice I’ve been doing at home and the inner belief we have every time we get in and out of position to do something was proven again.”

“Like I said before, it doesn’t matter where it is, who it’s against, it’s just a question if the game is in shape. When it is, we’re all right”.

A large contingent of Aussies teed up at St Andrews but only three players made it though to the weekend.

Deyen Lawson lead the way in 27th place on 7-under to make his first cut since the Cazoo Open in July.

Brett Rankin was the next best in equal 51st followed by Min Woo Lee at 1-under and 58th place. ​
Bryden Macpherson, Maverick Antcliff, Scott Hend, Travis Smyth, Jason Scrivener and Dimi Papadatos all missed the final round.

Scrivener, who became a new father last month, was playing in his first tournament since the Open Championship.

The Western Australian sits in 16th place on the Race To Dubai and will need to shake the rust off quickly with only four tournaments left before the season-ending DP World Tour Championship in Dubai in late November.