Sweden’s Alexander Bjork secured his first European Tour victory winning the $3.1 million Volvo China Open with an impressive final round 7-under-par 65 to see him finish at 18-under-par to defeat Spain’s Adrian Otaegui by a shot.

“It’s probably one of the best rounds of golf I’ve ever played. Probably the best round because of the situation, didn’t make pretty much no mistakes today, so I’m super happy.”

“I just lost out in Hong Kong in the first tournament of the season with a bad finish and I was close last week (in the Hassan Trophy) so it was my turn today and I’m so happy for that.”

Bjork played the outward nine in 3-under- par, and came home one shot better to record his 65. It was an impressive display in how to close out a tournament when the pressure is on with a bogey free final day.

With the win, Bjork has moved to 9th on the Race to Dubai standings and has climbed into the top-75 on the Official World Golf Ranking. The victory follows on from an impressive rookie season last year, when he recorded three top-10 finishes, including third in the HNA Open de France. 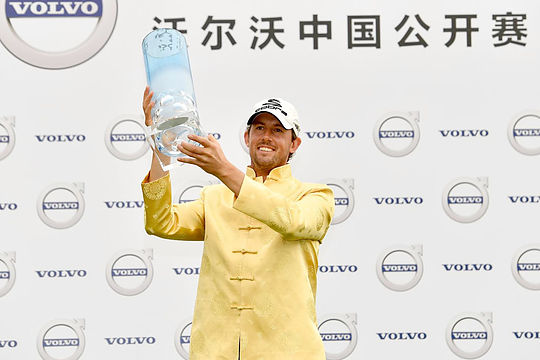 It’s not the first occasion Bjork has been in the winner’s circle having won previously on the European Challenge Tour in 2016, yet it was certainly his biggest to date.

Overnight joint-leader Matt Wallace ended the week in tied-third place alongside Jordan Smith and Jorge Campillo, with Denmark’s Lucas Bjerregaard a further stroke back in fifth.

Defending champion Alexander Levy began the day three shots off the lead and collected two birdies on the second and sixth holes to boost his chances of becoming the first three-time winner of the event. But the Frenchman couldn’t maintain his challenge going on to finish with a round of 69 at 12-under, six shots behind Bjork in a tie for 14th.

Bjork finished 43rd on last year’s European money list with just over A$1.5 million in earnings and is already close to surpassing that sum with Sunday’s victory. His maiden European Tour win sees him move to a 2018 prizemoney total of A$1.4 million.

Marcus Fraser was a further shot back at 8-under to share 32nd position and the last of the Aussies to make the cut.