Bjorn back in winner’s circle at Euro Masters

Denmark’s Thomas Bjorn singled out his ‘grinding’ manners in holing a birdie putt at the first extra play-off hole and capture a second Omega European Masters title in three years in Switzerland.

In what was a huge sponsorship coup for Callaway Golf, Bjorn emerged from the mist and steady rain to defeat Scotland’s and fellow Callaway backed Craig Lee after both players had ended regulation play locked on 20-under par. 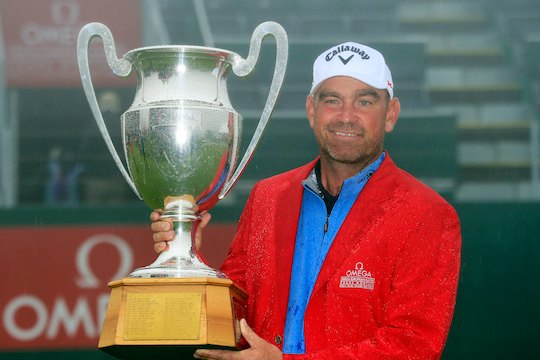 Bjorn had posted a round of 65 but then Lee’s birdie attempt putt on the last green lipping-out in a score of 67.

Moments later Bjorn holed a 12-foot birdie on the same green to claim a 14th Tour success but his first since winning the Swiss title two years ago.

“When I get into situations like today I really how to grind it out and I have to say I’ve been pretty good at closing out tournaments in my career,” he said.

“I give everything in those situations and I just grind, and grind and grind even knowing that I don’t need to play great.”

“That’s what it’s about late on Sunday afternoons and I’ve just got that in me.”

“Then the last time I won here in Switzerland I had already won twice in the season including the week before at Gleneagles, so I was on kind of a roll and to win here was a bonus.”

“This year I have come up short a few times including the hurt in Munich but I came here really desperate to win this golf tournament so this one is very sweet for me given I am 42 years of age.”

Victory earned Bjorn a first prize cheque of €366,660 and lifted him from 66th to 45th on the World Golf Rankings.

One of the first text messages Bjorn received was from European Ryder Cup Paul McGinley, and a fellow vice-captain in the 2010 and 2012 victorious European sides.

Andrew Dodt enjoyed his best finish of the season, closing the tournament in a tie for 15th for a cheque of €29,744.00. Brett Rumford finished alongside Dodt to continue a stellar 2013 season, which sees him in 7th place on the Race To Dubai table with €1,067,099.

Marcus Fraser was another stroke back in T20 with Scott Hend at 6-under and T26.