Blake Windred: Taking On The World

Blake Windred says he’s a better player now than he was twelve months ago when he first experienced international amateur golf in the UK and the US. On the eve of his second ‘tour’ to the main amateur events in the northern hemisphere the 19 year-old is full of optimism following his 1-stroke victory last Saturday at the St Michael’s Cup in Sydney.

The win was not only timely, Windred’s first since the 2015 Jack Newton International, but follows on from a string of top-10 finishes this season in top Australian amateur events, including a top-20 at the Queensland Open. 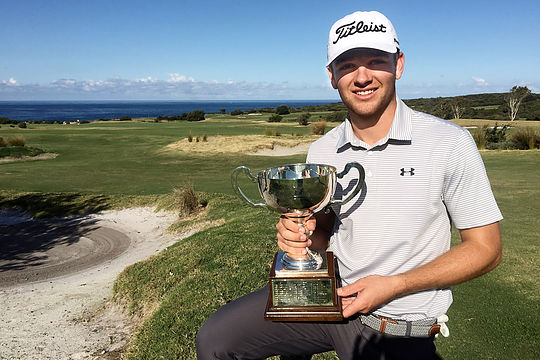 On Saturday, Windred proved to himself that his game and career pathway is heading upwards. It was the perfect prelude for the Novocastrian heading in the a two month overseas tour.

“I was able to get a win despite not bringing my ‘A’ game with me,” said Windred.

“That’s one of the main differences between where I was last year to where I am now. I’ve improved my ability to score when not playing well. I would make silly errors and was not able to grind out a score. On Saturday I was able to grind a score out on a tough layout even though I was not playing that well.”

Windred puts the positive changes in his game down to his first taste of international golf last year when he played in the St Andrews Links Trophy and British Amateur as well as a number of main amateur events in the US.

“Last year was a little ‘taste test’ really for me,” says Windred.

“I saw how much work I really needed to do to compete. It’s crazy the level of player talent which you are up against. I came away realising that I needed to fully re-look at my work ethic, that I needed to work harder and most importantly that I needed to improve in my ability to score when not playing well.”

Windred’s first event will be the St Andrew’s Links Trophy played on the Old Course followed by the British Amateur.

“I did reasonably well last year in both these events and going back to play them a second time, well, I’ll be aiming high,” says Windred.

“I really want to win one. Heading back and feeling that you have more experience is a huge advantage. I know what I will be up against and I’ve worked hard over the last year fully aware of the challenges that I’ll face.”

“That’s the difference in gaining the earlier experience, you are under no illusion as to what you will be up against given the level of talent which is playing and more specifically, what it takes to get a win. It isn’t easy as everyone playing is good enough to win, but that’s the beauty of competing in these events.”

Following the UK trip, Windred will return home for a few weeks, work with his service providers at the Golf NSW High Performance centre, and set up ready for a string of high profile amateur events in the US starting with the Players’ Amateur, Porter Cup, Western Amateur and the Canadian Amateur.

He’ll also seek to pre-qualify for the US Amateur. With a R&A Work ranking sitting just outside the world’s top-100, this upcoming schedule is Windred’s chance to not only make an impression but climb the rankings and cement his position inside the desired world’s top-50.

“Everything is improving with my game. I’m getting that little bit better at the thinss that count which only comes with experience. Now’s the time to test yourself and see if all the hard work you do back home will pay off in these bigger events in the UK and US. It’s a big few months ahead, but I’m ready for it.”