Bland finally gets a ‘W’ in his 478th European event

Bland, 48, shrugged off a decades-long European Tour victory drought in dramatic manner in holing a three-foot par putt at the first extra play-off hole at The Belfry to become the second oldest European Tour winner ever behind Spain’s Miguel Ángel Jiménez.

The very affable Bland, who dropped just one shot in 73 holes on the famed Ryder Cup host venue, denied 24-year-old Italian sensation Guido Migliozzi, who three-putted for bogey in the playoff.

There were emotional scenes first when Bland holed a 28-footer for birdie at the last hole in his round of 6-under 66 to finish on 13-under par and then around an hour later in finally becoming a Tour winner.

The tears flowed particularly when Bland found himself being interviewed by SKY Sports Golf, Tim Barter, who has been his coach for almost all of Bland’s 25-years as a pro.

Southampton supporter Bland made his Tour debut at the 1998 Open Championship and has gone close to victory over the years with three second place finishes to his name (2002, 2017 and 2020).

While Bland hasn’t always shot the lights out, he has been consistent enough to keep his card every year since the 2002 season and amassing close to €6 million along the way. 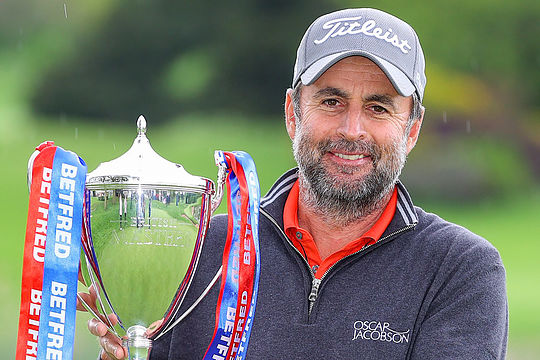 And while thrilled to be taken off the list of ‘Players Played The Most Tournaments Without A Victory’, Bland had strong words of encouragement for Drysdale, who earlier in the week missed the cut in his 523rd Tour event.

Bland said: “My advice to David is just keep going, they’re all good enough to win.”

“‘Double D’ has been up there and he’s had a few close calls in the last couple of years, I think the one in Qatar – Jorge Campillo was holing everything he looked at and I’m sure David was thinking, ‘what have I got to do?’

“But I’ve known David for donkey’s years and we have a laugh about it. He’s a great guy and he’s more than good enough to win.”

“Anyone who pegs it up on the European Tour these days is good enough to win.”

“I’m sure he keeps going and as long as he stays fit and healthy then that win is going to come for him”.

Tournament host Danny Willett, who hasn’t teed it up since missing the cut at the Masters in April, knocked off the rust for a respectable share of 11th place alongside the likes of Thai superstar Jazz Janewattananond.

Min Woo Lee lead the way for the Australians posting his best result of the season in a share of 21st place with an opening round 75 proving costly.

Next up for the top Europeans is the PGA Championship at Kiawah Island followed by the Made in HimmerLand in Denmark from May 27th.