South Australian Adam Bland and New Zealander Michael Hendry have qualified for The Open Championship after finishing in the top-3 at the Mizuno Open on the Japan Golf Tour.

Bland will contest his third Open after closing in third place in the Mizuno Open on Sunday. The 34-year-old has played The Open previously at Royal Liverpool in 2006 and St Andrews in 2015, missing the cut on both occasions. 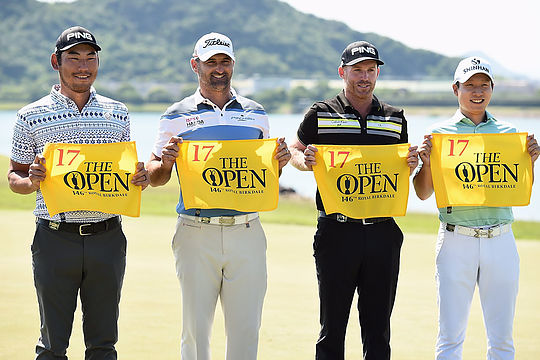 New Zealander Michael Hendry and South Australian Adam Bland were among four players to earn a teetime at the 2017 Open Championship at Royal Birkdale (Credit: The Open)

“This will be my third Open, I haven’t been to Royal Birkdale so I’m hoping I can perform better than I have the last few times.”

“This is what you play for all year, the chance to be in The Open. If you can qualify to play in all four majors, that’s the goal, to be that good in the world.”

Bland finished 7-under par to finish behind American Chan Kim.

“It’s great to be through to The Open. This is the fifth time I’ve played in the Mizuno Open and I’ve never finished outside the top-11, so I’ve come close on a number of occasions,” said Hendry.

“I’m just going to really enjoy myself and hopefully have a good week. It hasn’t really sunk in yet. I think once I start booking flights to the UK and looking at accommodation it will start to become real.”

The other Australians who are assured of a start in The Open are Scott Hend, Cameron Smith, Matthew Griffin, Ashley Hall, Aaron Baddeley, Jason Day and Adam Scott, while Ian Baker-Finch has playing rights as the 1991 Open champion.