A five-under-par final round was enough for Rohan Blizard to win his first professional tournament at the Western Australian Open.

The 2007 Australian Amateur champion fired rounds of 67-70-74-67 to be at ten-under-par and a two stroke win over Ashley Hall, David McKenzie and Matt Jager. 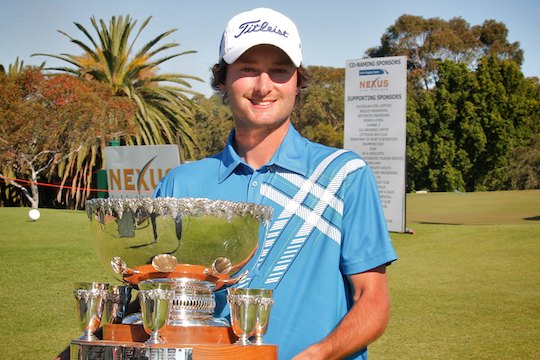 Jager had started the final round with a two stroke overnight lead in search of his maiden professional title after earlier rounds of 69-69-67 but closed with a three-over-par 75.

The final round was filled with missed opportunities from a number of our emerging players.

Upon signing for his ten-under-par total, Blizard was equal with three other players, Jager, NSW amateur Matt Stieger and Heath Reed.

Expecting a playoff, Blizard headed for the practice green.

“I started to head to the practice green and then saw the scoreboard change,” said Blizard.

“I ended up not having to get into the playoff as they got into some trouble out there on seventeen.”

Reed, who lead the tournament following the second round, triple bogeyed the 17th, Stieger doubled bogeyed the same hole and Jager finished with a bogey.

Stieger was seeking to become the first amateur to win on the Australasia Tour since Rick Kulacz won the 2006 NSW Open, Reed was in search of his first victory since the 2008 South Australian PGA Championship and Jager was after his maiden professional win.

The three also were needing the win to secure starts in the Australian Open and Australian PGA Championship.

In 2008, Blizard qualified for The Open Championship as an amateur, which followed up his win at the 2007 Australian Amateur championship as well as victories at the NSW Medal and East of Scotland Open and six top-10 finishes at National Trial events to cement his position in the Australian team for the Eisenhower Trophy that was played in Adelaide.

“I was watching the leaderboard all day,” said Blizard.

“I got off to a good start on the front nine so I knew I was in with a chance going into the back nine but I thought I probably had to have one better which was lucky for me I guess. I’m ecstatic. My first professional victory is a big thing and I’ll always remember that.”

Blizard secured playing rights on the Asian Tour in 2009 when he finished in the top-40 at Qualifying School. He enjoyed a top-20 finish at the Macau Open during his rookie season and featured strongly at the 2008 Australian Open.

In the last two seasons Blizard has finished just outside the top-100 in ranking in Asia and the win in Western Australia was against a strong field.