Blyth claims second win of the season at NSW Open

Queensland’s Adam Blyth has taken out the most important title of his career to date with victory in the NSW Open Championship at Sydney’s Stonecutters Ridge Golf Club.

With the golf course yielding low numbers from day one, when amateur Brett Coletta shot a 10-under round of 62 to lead by just one shot, Blyth shot rounds of 65, 63, 66 and 71 for a total of 23-under 265, three shots clear of Queensland Open champ Coletta and WA’s Jarryd Felton. 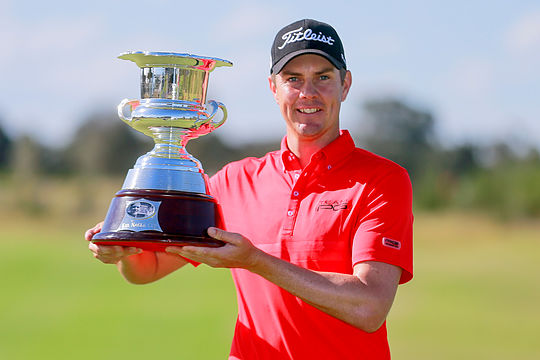 “It’s been a magical week. I enjoyed it. I played probably the best golf of my life,” said Blyth. “To share it with my girlfriend and dad is just super special.”

It was a hard fought victory for Blyth who after opening with two birdies went on to drop six shots on the front side to lose his four-stroke advantage at the turn.

However, the Yeppoon native more than steadied the ship with five birdies on the back side to take the Kel Nagle Cup and a $72,000 pay cheque.

“Take away the front-9 today and I played beautifully and putted so well,” Blyth said,

Back in September, Blyth took out the South Pacific Open after a final round tussle with fellow Yeppoon resident Jake McLeod and with this win, becomes the first player since Adam Scott in 2013 to win twice on the ISPS HANDA PGA Tour of Australasia season.

NSW’s Rhein Gibson and SA’s Wade Ormsby, who fired 8-under in the final round in his first tournament back from injury since May, finished tied for fourth at 19-under with Stephen Leaney and Rory Bourke two shots further back at 17-under.

The ISPS HANDA PGA Tour of Australasia now heads across town to Rose Bay in the eastern suburbs for the Emirates Australian Open Championship.

With his status on the PGA Tour tenuous, defending champion Matt Jones has opted to remain in the US however the return for the third consecutive year of a well-rested Jordan Spieth and Adam Scott ensure a marquee field will be on hand to battle it out for the Stonehaven Cup and places in next year’s British Open.

The 101st Australian Open tees off this Thursday 17th November.