Played at the Dundonald Links near Royal Troon, the final day drama wasn’t quite to the level of the tremendous duel staged down the road for The Open Championship last week, but it was nonetheless suspense-filled with the lead changing hands multiple times between a handful of players. 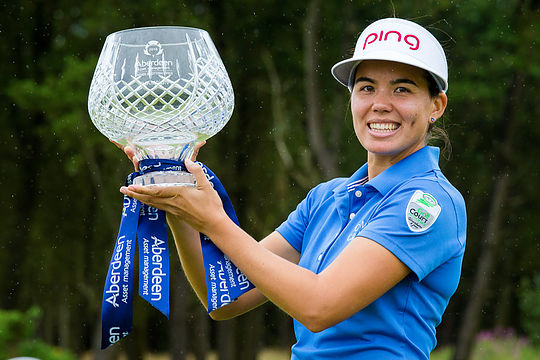 The 27-year-old from Marseille eventually snuck past long-time leader Linda Wessberg to win with a par on the par-5 18th after the Swede’s four-foot birdie putt to tie slid by the hole.

“What a tournament to win: the Scottish Open! I’m so happy and I want to thank my parents and my sponsors for encouraging me to play even when I didn’t want to. Today is just one of the best days of my life.” said Boineau, who finished at 11-under after a final round of 68.

Overnight leader Becky Morgan slipped back to finish with a final round 75 and was pipped into third place by Edinburgh-based American Beth Allen, who dropped a shot at the last for a round of five-under 67 when a birdie would have tied her for the lead.

Sweden’s Caroline Hedwall shot a course record final round of 64 to finish alone in 5th place and earn one of the three spots on offer into next week’s Women’s British Open at Woburn for the leading three players not already exempt, along with France’s Gwladys Nocera and Sweden’s Isabella Ramsay.

NSW’s Sarah Kemp was Australia’s best at 3-under, tied for 12th, while WA’s Whitney Hillier finished tied for 42nd in the 54-hole event.