Bonnie Doon Golf Club secured its first Metropolitan Division 1 Pennant in over two decades defeating Concord 4½ matches to 2½ in the final of the Sydney Division 1 Metropolitan Pennants at Terry Hills Golf and Country Club on Sunday.

It was a closely fought final and as is the case with many outcomes in pennant encounters it was the Doon’s lower order that secured the prized flag. 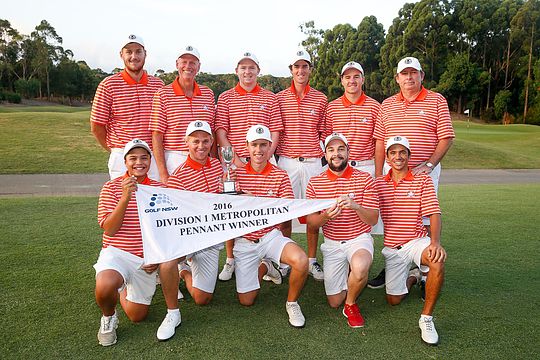 Following comfortable wins after Jack McLeod’s 6&5 result over Concord’s number 5, Jac Delaney, and Kurt Burns at number 6 for the Doon also securing a 6&5 result over Josh Gadd, whose preparation had been hampered with a wrist injury, season pennant stalwart Greg Bell at number 7 for the Doon fought back gallantly to win from three down on the 18th.

Concord, however, did not go down without a fight with Mitchell Norbis playing number 2 securing a solid 3&2 win over Troy Moses and Nick Watts winning the number 3 contest with a 2&1 victory over Mitchell Gannon. Both stellar matches from two talented players.

The top-order encounter had Austin Bautista, the reigning NSW Amateur champion, against fellow state player, Jason Hong, with Bautista securing the match for the Doon, 2&1 effectively confirming the win for the Doon.

The 4th order match between James Grierson and Brandan Biddle was then halved.

The Doon’s win was 22 years in the making and full credit to a club which has invested in junior development programs, offered scholarships, nurtured a talented crop of players and devoted considerable resources towards winning one of the most sought after prizes in amateur club golf.

If there was to be a ‘man of the match’ in what is otherwise an all-round team effort, it would arguably go to Bell, who is in his 50′s yet plays like a 20-something.

Bell’s experience proved a solid foundation at the lower order which enabled the young guns to flourish throughout the season. Bell was 2 down with 3 to play, a birdie on the 16th followed by a par and then an approach on the 18th to 4 feet of the pin to win 1-up was one of the most impressive comebacks in the history of club pennant golf.

Truely a great victory for the Doon, a team with a classic mixture of experience and youth that combined brilliantly throughout the season when many other main Division 1 clubs as the season wore on became fragmented and lack unity. Arguably club representative golf at its finest.

Twin Creeks took out the Division 3 flag with a 5&2 win over Cromer, with Richmond accounting for Eastlake, 4½-2½.

Division 5 saw Bardwell Valley too strong over Palm Beach with a solid 5½-1½ victory.