The 24-year-old from the southern Parisian suburb of Montrouge shot a final round of 73 to finish on 10-under-par, two shots ahead of Katie Burnett from the United States. 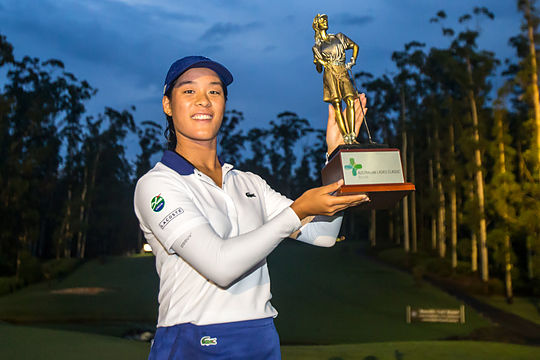 It was Boutier’s second Ladies European Tour title following the 2017 Sanya Ladies Open and her fourth in total after the Sioux Falls GreatLIFE Challenge and Self Regional Healthcare Foundation Women’s Health Classic on the Symetra Tour.

She virtually assured herself of the title with a third round of 67, played in heavy rain on Saturday, which gave her a five-stroke lead heading into the last round at Bonville Golf Resort and she thanked her caddie Shane Codd for keeping her equipment dry.

Sunday’s play teed off in beautiful, sunny conditions and the second-year professional golfer began with two birdies and a bogey in her first seven holes. She kept her five-stroke advantage through the turn, before Katie Burnett birdied the 10th hole to get within four strokes.

Then, at 2pm local time, dramatic tropical storms moved through the area forcing the suspension of play for almost four hours.

After three hours of heavy rain, thunder and lightning, the sun shone through the clouds and the course drained exceptionally quickly, allowing the leaders to return to the par-4 13th at 5.45pm local time.

After the break, Boutier played her third shot just beyond the green and two putted for a bogey, reducing her lead to three strokes. Both players bogeyed the 15th and Burnett missed her curling four-footer at the 17th, which would have reduced the deficit.

At the final hole, Boutier pushed her drive into the trees and decided to lay-up, while Burnett launched a perfect drive down the middle of the fairway.

Boutier struck her third shot to within eight feet of the flag, but her birdie putt turned just below the hole and she tapped in for a par and a 10-under-par total. Burnett, meanwhile, took two putts for a birdie on the final hole.

“It feels great. I really enjoyed playing at Bonville Golf Resort and I’m proud of how I handled the weather conditions,” said Boutier, who was a standout at Duke University and now bases herself in Texas.

“We had a little bit of everything with a delay in the middle of the round, so it wasn’t too easy to get back into the rhythm, but I’m pleased that we finished.”

“I was a bit nervous, because I wanted to finish before dark and it’s not always easy when you go back out after a delay; it was definitely tough. I had two bogeys after we went back out, but I did my best. I feel like I managed it pretty well.”

Playing with Boutier, Burnett was three-under-par after 10 holes, but she ended with a 69 for a total of eight-under-par.

Iceland’s Valdis Thora Jonsdottir (70) ended one stroke back in outright third position, which equalled her career best finish recorded at the Sanya Ladies Open in tropical Hainan, China, in November, which was the scene of Boutier’s first Ladies European Tour title.

Australian Rebecca Artis, who was born and raised in New South Wales, tied for seventh place with US rookie Casey Danielson, while Western Australian Hannah Green tied for ninth with Charlotte Thompson from England.

The Ladies European Tour and Australian Ladies Professional Golf Tour next move to nearby Coffs Harbour Golf Club for the Women’s NSW Open, for the fifth week of major women’s golf tournaments in Australia.