After kick-starting his week with an opening round of 8-under 62, Bowditch, who had missed three of his last six cuts, shot a final round 5-under 64 to win by four shots over Americans Charley Hoffman, Jimmy Walker and Scott Pinckney on 18-under.

Beginning the final round with a two stroke lead, the 31-year-old distanced himself from the rest of the field posting four birdies on the back nine to give him two-for-Texas in career titles after winning the Texas Open in San Antonio last year.

Bowditch jumped 52 spots to No. 16 in FedEx Cup points and qualified for next year’s Masters.

“I wasn’t really at ease, I was like a duck on a pond; my insides were moving a mile a minute and on the outside I was cruising,” said Bowditch after the victory.

“I never thought that it was my day, there are so many things that can happen and I wasn’t sure what was going on out there. I just had to stick to my game plan and wait for my moments but after I hit my tee shot down 18 I knew.” 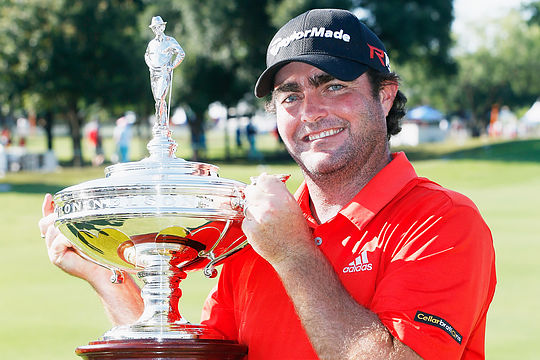 Bowditch’s win turns around a tough year for the Novocastrian, who has made only eight cuts in 18 starts on the PGA Tour in the 2014/2015 season.

“It’s basically the way my career has been my whole life, when its good, it’s good but when it’s bad I am just trying to hold on and make some cuts,” added Bowditch.

Bowditch’s road on the professional tour has been rocky at times since he graduated from a fine amateur career that included being Medallist at the 2001 Australian Amateur. Yet to his credit Bowditch has continued to pursue his dreams and compete when many others would have packed it in.

“I’m obviously not at the superstar level,” says Bowditch. “I just go out there and do my best and hopefully every now and again I get a chance to win.”

Sunday’s victory is Bowditch’s 7th professional tour title, having won twice on the Web.Com tour at the 2005 Jacobs Creek Championship and the 2010 Soboba Golf Golf Classic. He’s also won twice on the PGA Tour of Australasia.

The remaining Aussies in the field included Cameron Percy who finished 10th for his best finish of the season and tournament invitee, Rod Pampling who finished 22nd.

John Senden finished in a tie for 46th position along with former Australian Amateur champion, Cameron Smith, and Greg Chalmers.

Matt Jones was the last of the Aussies to make the cut finishing in a tie for 64th position at even par. Aaron Baddley, Marc Leishman, Geoff Ogilvy, Robert Allenby all missed the weekend.