While Newcastle’s Steve Bowditch has enjoyed some good years on the PGA Tour including the 2015 season where he won the AT&T Byron Nelson and racked up a total of US$3 million that year, his recent form had seen him make just two cuts in his last 32 PGA Tour starts.

In an effort to shake things up, Bowditch took the novel approach of posting his new caddy job search on Twitter. 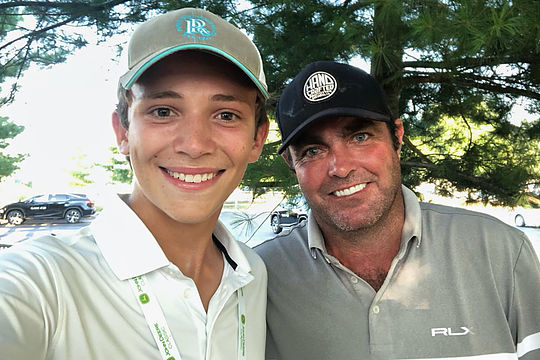 “Any local kids/college players in the Quad cities area that are interested in caddying in the tournament this week, this thread is for you. The best response/reason gets the job. 2pm Tues start, finish Friday. 1% chance Sunday. Payment: all leftover gloves and balls are yours.”

And just a day later, Bowditch posted the results of his search with the winning entry coming from a local 16-year-old, Elias Francque.

“I visit my grandparents farm nearby. Ive played the course and loved it. Two of my uncles work for John Deere. I’m a caddy at my local country club and on the golf team. I turn 17 on Friday and helping you make the cut would be a great birthday present! I love Australia.”

Unfortunately for the newly crowned bagman, the pair were unable to claim a fairytale finish with Bowditch missing another cut following rounds of 73 and 72 – leaving him six strokes outside of the 3-under cut mark.

Outside of missing the weekend action, Francque was happy just to have had the opportunity to be inside the ropes at a PGA Tour event.

“Thanks to @bowdo83 for letting me caddy this week. Steven is a stand up guy and it was great to be able to meet him. This was an incredible experience and the best birthday ever. Good luck the rest of the year Bowdo!” tweeted Francque.