All credit to Steven Bowditch for his demeanour despite posting the highest-ever four round score in the history of the World Golf Championships – a 325 tally.

There were just four people clapping when Bowditch tapped in for par to end his week at the Cadillac Championship, then walked off the 18th green with a smile as those in the grandstand applauded his effort. 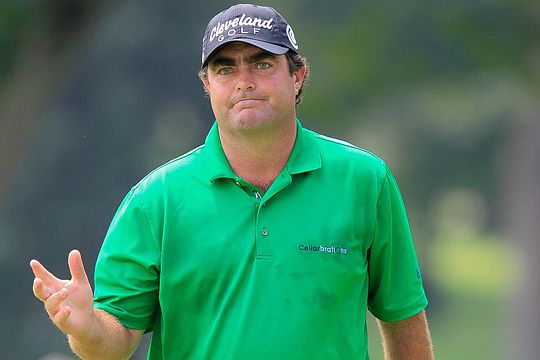 The 32-year old Newcastle-born, who now resides in suburban Dallas, posted rounds of 81, 80, 80 and 84 for a 37-over par total on the Blue Monster course at Trump Doral.

His score was so bad that a young volunteer who was tasked with following Bowditch around with a portable scoreboard was told not to post any numbers, and no one questioned that logic.

“I think there was four dozen golf balls at the start of the week in my locker, but I’m down to my last one.”

The double PGA Tour winner posted eight birdies, including three in succession mid-round on day two, but then he also recorded 14 bogeys, 3 double bogeys, 5 triple bogeys, 1 quadruple bogey and a ’10’ at his fifth hole on day two.

However it was the Blue Monster that did the most damage for the player who won the 2014 Valero Texas Open and last year’s Byron Nelson Classic, and also collected more than $US6.6m in prize money.

In fact, on the final day Bowditch found the water just twice at the third and 14th holes.

“It’s the Blue Monster for a reason,” Bowditch said. “I wasn’t driving it the greatest here, and it’s all over if you can’t drive it.”

“I shot 37 over par and still made a pay cheque so it’s not all that bad.”

Indeed in this week’s no-cut event Bowditch should still pocket $US48,000, despite being the first player to shoot four rounds of 80 or more in a PGA Tour event, officials said, since Mike Dunaway posted four consecutive 81s in the 1983 Panasonic Las Vegas Pro-Celebrity Classic – a five-round event. The previous high score in a WGC stroke-play event was 323, by Huang Ming-jie at Shanghai in 2013.

Painful as it was for Bowditch, at least Sunday’s round went quickly.

Playing alone for the second straight day, Bowditch finished his round in 2 hours, 12 minutes. He signed his card, opened a Diet Coke and was thinking about teeing it up in a couple days in Tampa by the time most of the leaders were even warming up for their final rounds at Doral.

“It’s the game of golf,” Bowditch said. “You don’t want to play that way, but it is what it is. No one wants to play that bad, but it’s just golf. That’s it. I’m out here in one of the biggest events of the year, playing bad – but I earned my right to be here.”