Cruising through the matchplay section of the event, Bowen, who plays out of Royal Queensland, was pushed all the way to the 19th hole by fellow RQ member, Quinnton Croker in what was a tantalising final. 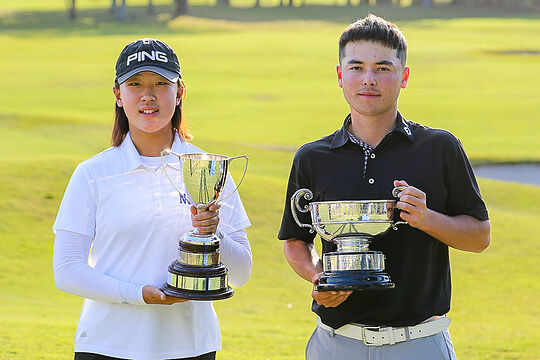 Bowen has enjoyed quite the season, winning the NT Amateur in May before signing for a 5th place at the Queensland Boys Amateur and 7th at the NSW Junior Championship in July.

In the women’s game, it was Avondale’s Rachel Lee, who stole the show with a 2&1 victory of Queensland’s Sarah Hammett, who plays out of Emerald Lakes on the Gold Coast.

Lee secured the final matchplay slot after a 16th place finish in the opening strokeplay rounds but quickly made up for her slow start with an unlikely 1-up win over two-time Australian Junior Amateur star, Jeneath Wong.

Lee was pushed to the edge against Godiva Kim in the quarter-finals before a solid 3&2 victory over the Sunshine Coast’s Rhianna Lewis saw her book her place in the final.