Keegan Bradley held off Justin Rose in a sudden-death playoff to win the rain-plagued BMW Championship on Monday for his first PGA Tour victory in six years.

Bradley shot a final round 6-under 64 to finish at 20-under par to force the playoff and won it with a par on the first extra hole to record his first victory since the 2012 WGC-Bridgestone Invitational.

“A lot has happened to me over these six years,” said Bradley. “I kind of fell off the radar there for a little while. It’s tough to go from being on Ryder Cup teams, being on Presidents Cup teams to being outside the top 100 in the world.”

Bradley, who birdied the 16th and 17th holes to make his late charge at the title also gets a start at the winners-only Sentry Tournament of Champions early next year in Maui.

Rose could have won in regulation but lipped out for a bogey on the last hole to force the playoff after Bradley earlier made bogey. 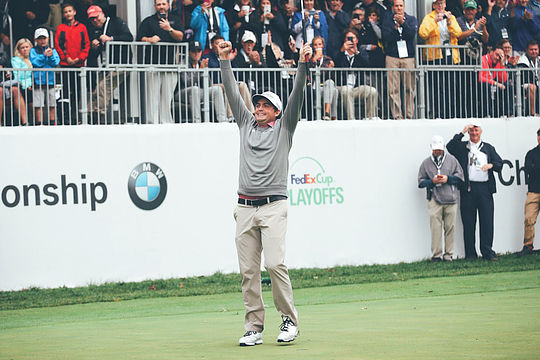 He is the No. 2 seed behind Bryson DeChambeau among the top 30 who advance to the Tour Championship starting 20th September at East Lake in Atlanta, giving him a clear shot at the US$10 million prize.

Billy Horschel and Xander Schauffele finished T3 at 19 under and Rory McIlroy was solo fifth at 18 under.

Jason Day was the best of the Australians finishing in a share of 24th position, Day’s final round 70 seeing him slip nine places down the leaderboard. Marc Leishman moved nine places with a final round 68 to finish in a tie at 41st position.

Adam Scott failed to fire and finished in a share of 51st position to see his season out having not qualified for the Tour Championship.

Tiger Woods finished 6th for his sixth top-6th finish this season, and qualified for the season ender after making another run at his 80th PGA Tour title, coming up three shots short of the playoff.

Monday’s result helped him finish 20th in the FedEx Cup points, meaning a spot in the 30-player Tour Championship next week. It will be Woods’ first appearance in the FedExCup finale in five years.

The top 30 in the FedExCup standings earn exemptions to the Masters, US Open and The Open, although Woods has lifetime entry to the Masters and an exemption through age 60 at The Open.