Brady Watt closed with a 6-under-par, 66, for a 20-under-par total to win the Keperra Bowl by five strokes over Viraat Badwar in Brisbane.

Brett Drewitt finished in third position at 14-under-par with Cameron Smith three strokes further back in 4th position at 11-under.

Watt’s win at Keperra was set up with a peerless third round 64 to move into a tie with James Gibellini moving into the final round.

Gibellini was unable to capitalise on his earlier fine scoring, finishing with a 6-over-par 78 to slip back into a tie for eighth position

Watt, the 2011 Lake Macquarie Amateur champion, had earlier rounds of 69-69 to catch Gibellini and never looked to be in danger of loosing the title during today’s final round with superb driving and solid putting to move at one stage to a lead of five. 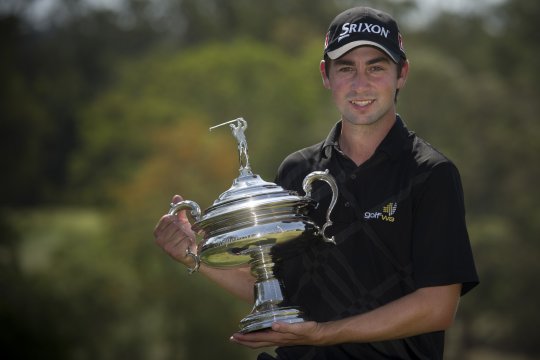 “This is a very satisfying win for me,” said Watt.

“I proved to myself that I can do it again and put myself into position to finish it off again.”

Watt recently won the Perth City Invitational and came to Brisbane with a tied fourth at the Mandurah Amateur.

“I’m really looking forward to the Australian summer of golf and getting a many results that I can,” said Watt.

“With the Federal, The Dunes Medal and Victorian Amateur all coming up, this is great to get a early win in the season. I am trying to get into the top-5 of Australian amateur ranking and working hard with my coach back in Western Australia. Results like today are very pleasing.”

Watt had entered the Keperra Bowl ranked 140th in the world and as Australia’s number eight ranked amateur.

The win at Keperra against a stellar amateur field that included Cameron Smith, Jake Higginbotom, Nathan Holman, Rory Bourke and Todd Sinnott, to name a few, is testament to how well Watt played the tight Keperra Country Club layout.

Watt’s ball striking was impressive as well as his course management, never placing himself in dangerous situations and being able to keep his momentum going during the closing stages of the final round.

“I was able to get the right lines off the tee early and that helped,” said Watt.

“It is always great to win against a field of this nature. It wasn’t easy and it certainly was a challenge.”

Brett Drewitt again confirmed why he’s one of our most consistent amateurs with another top-3 result finishing with a 68 after the 2012 NSW Amateur champion carded an impressive third round 66.

Cameron Smith also recorded another stellar top-5 result and with the Federal Amateur in Canberra in less than a month and The Dunes Medal in December on the Australian Amateur schedule, Smith poises a threat in every event he enters.