22-year-old Brandon Stone shed tears of joy after claiming his national title and first European Tour win after a dramatic final day at The BMW SA Open, hosted by City of Ekurhuleni.

That reaction came after a roller coaster day’s play which saw Stone move five shots clear of the field at one point, before being pegged back and eventually finishing 14-under to beat countryman Christiaan Bezuidenhout by two shots. 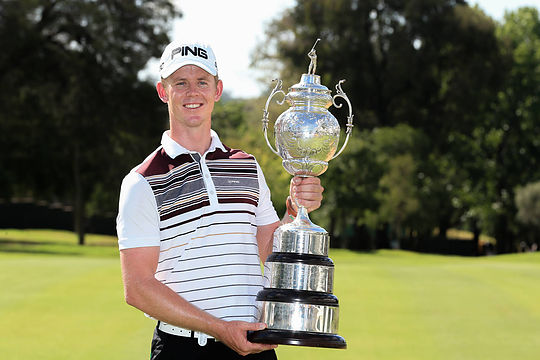 Stone’s seven birdie, six bogey final round 71 was good enough for the talented youngster to claim the crown in just his 27th start on the European Tour.

“It’s too good to be true. I’m overcome with emotions at the moment. There was a lot of ups and downs in that final round but to come out on top at the end is incredible.”

Englishman Daniel Brooks actually held a two-stroke lead with the back nine to play before Stone rallied from a poor front nine with four birdies in five holes from the 12th to move two ahead.

A two-putt on the par-three 17th all but sealed it for Stone, who parred the last for a 14-under total. Bezuidenhout birdied the final hole to ultimately claim second place alone after Brooks bogied the 18th to fall back into solo third at 11-under.

Australia’s Jason Scrivener had a fine finish to his tournament with a six-under 66 to claim a tie for 12th place, extending his solid start to his European Tour campaign in his first three events of the season.

The European Tour will remain in South Africa this week for the Joburg Open at the Royal Johannesburg and Kensington Golf Club.