Bransdon, Anstiss share round one lead at Vic Open

Victorian David Bransdon and first year Professional James Anstiss from New Zealand blitzed the Creek Course at 13th Beach Golf Links to share the lead following round one of the Oates Vic Open.

Teeing off in rainy conditions this morning, Bransdon got his round off to a familiar start, his bogey free 8-under 64 the same score from his first round in last year’s tournament, also on the Creek Course.

“Maybe I should ask the organisers if we can play three rounds around here and just the one on the Beach instead,” joked Bransdon.

“I just seem to hole putts over there, I get over to the Beach and don’t hole as many.”

Bransdon comes to the Oates Vic Open off a strong performance in the 2017 Australian PGA Championship where he finished tied fourth. 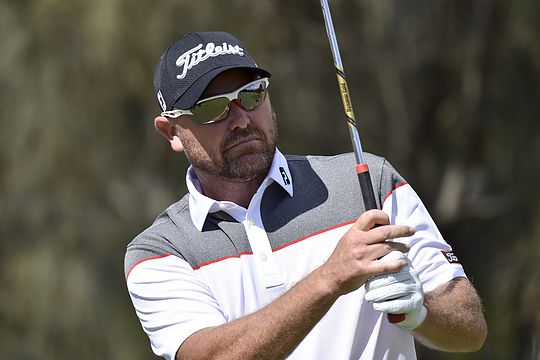 He credits his solid form to his putting game; something he’s been working on with Gold Coast-based PGA Professional Matt Ballard.

When asked how he’ll approach tomorrow’s round on the Beach Course, Bransdon said he’ll be aiming to manage the 18 holes and avoid getting himself in to trouble off the tees.

Anstiss, in just his second tournament as a Professional was also bogey free around the Creek Course in posting 8-under 64 for a share of the lead.

“I played pretty solid, I hit a lot of greens and putted really well,” said Anstiss who made his Professional debut at the REBEL Sport NZ Masters.

Fellow New Zealander Nick Voke, also in his first year as a Professional, is one shot further back following his round of 7-under 65 also on the Creek Course.

Victorian Peter Wilson joins Voke on 7-under par while star amateur David Micheluzzi, Taylor Macdonald and Harry Bateman sit in a tie for fifth at 6-under par.

Beth Allen leads the Women’s Oates Vic Open following a superb 6-under 67 in the first round to hold a one stroke lead over Cheyenne Woods.

Swede Camilla Lennarth is a stroke further back in third place on 4-under while Minjee Lee shares the leading Aussie honours with Tahnia Ravnjak on 3-under.

Those unable to make the trip to 13th Beach Golf Links this week will still be able to watch the weekend’s action with the return of the Oates Vic Open live stream through PGA TV.