David Bransdon has blown the Isuzu Queensland Open wide open on day one at Pelican Waters.

The veteran Victorian carded a spectacular course-record 9-under 63 in the morning session to grab the early lead of a tournament he has won previously – in 2015 in a playoff at Brookwater, west of Brisbane. 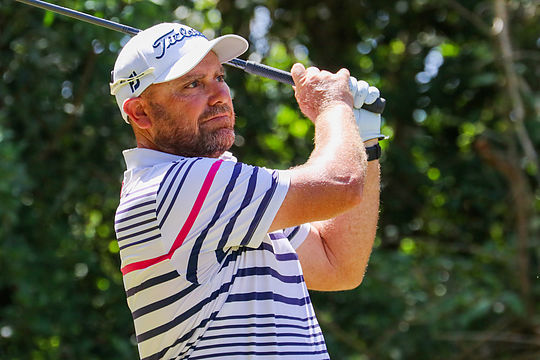 The 46-year-old admitted after his round that he thought a score between nine and 13-under might win overall this week at the Caloundra layout.

“(I didn’t think) nine (under) was out there in one day,” the Japan Golf Tour regular said with a cheeky grin.

“I holed a couple of nice putts early and then hit a couple in close…the putter was pretty good all day.”

Having started on the 10th hole, Bransdon made consecutive birdies to start, then four more on the trot from the 13th to sit 6-under through seven holes and have organisers scurrying for the record books.

Things cooled a little from that point, but there were no bogeys and three more late birdies ensured Bransdon knocked two strokes off the previous course record, despite limited exposure to its nuances.

“I played the back nine on Wednesday and the front nine on Tuesday (having only) played here once a long time ago,” he said.

Bransdon led by two after the morning phase with a couple of youngsters hot on his heels at the ISPS HANDA PGA Tour of Australasia tournament.

Amateur pair Jack Thompson, of Adelaide, and Josh Armstrong, of Canberra, each had eight birdies and one bogey en route to opening 65s.

Low scores continued to roll in throughout the day with Brad Kennedy posting a round of 7-under 65, highlighted by a chip-in eagle at the par-five third hole, in the afternoon field.

Returning to the form that saw him lead through 54 holes at last week’s Coca-Cola Queensland PGA Championship, demons from the final round at Toowoomba were out of mind for the Queenslander, who finished the day tied in second place alongside Thompson and Armstrong.

“It was one of those days today where I’m semi-motivated in terms of things that happened last week but at the same time didn’t put any pressure on myself and tried to go out there and do what I could,” Kennedy said.