Victorian David Bransdon has handed in the score of the day at the Oates Vic Open firing himself into the early lead after round one.

Playing on the Creek Course at Thirteenth Beach Golf Links, Bransdon was on fire early. With a hot putter in hand he was 6-under through the turn. 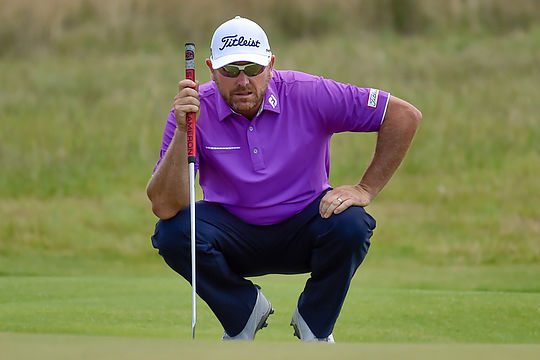 Starting his back-9 with a birdie, Bransdon was on a roll but despite calls of 59 watch from the media, he kept a level head to end the day at 8-under 64.

“It’s always nice to start a tournament with that sort of number,” said Bransdon.

This is Bransdon’s best score on the Creek Course, the easier of the two layouts but the one he is least familiar with.

“We have played it the last three or four years so just the practice round and then the one tournament round each year. This is certainly my lowest score,” added Bransdon, who also hopes to be on his way to his best Oates Vic Open result.

“I have had a couple of top-10’s here so it’s been ok, certainly not close to winning so it would be nice to be there on Sunday.”

Bransdon wasn’t the only player to take advantage of the Creek Course, New Zealander Michael Hendry and Queenslander Brett Rankin are just two shots behind him on 6-under the card.

Rankin credits his solid play to some important work done over the Christmas break with his coach; 2016 PGA Teaching Professional of the Year Richard Woodhouse.

Hendry is flying under the radar, despite being the highest ranked player in the field he has avoided the limelight.

“It was one of those days where I was walking off with 6-under thinking it could have been 10-under,” said Hendry.

“I played Singapore a couple of weeks ago and there was some good signs there. I feel like I have been close to playing well but not quite putting it together.

“It all came together today and if I can keep the same feelings and thoughts going there is no reason I can’t continue and have a few more good rounds.”

Deyen Lawson was the stand out in the afternoon session to shoot 6-under 66 to stay in touch with the leaders at the top of the board.

Lawson was able to rely on his local knowledge of the course and with a building wind hampering many, that knowledge came in to play to post the best score in the afternoon session.

He said he hopes conditions calm down to match most of the practice rounds earlier in the week.

“Hopefully the weather does what it did yesterday, it’ll be fair for everyone so that would be good. Either way I’ll just go out there and shoot my shot again and see how we go.”

Rounding out the top-5 on 5-under the card are Lucas Herbert, Matthew Griffin, Richard Green and Taylor Macdonald. They all played the Creek Course.

The Oates Vic Open will be played from 9-12 February at Thirteenth Beach Golf Links with a field of 144 players vying for a prize purse of AU$500,000.

The winner will receive Official World Golf Ranking Points and become fully exempt on to the ISPS HANDA PGA Tour of Australasia for the remainder of this season plus a further two seasons.