Unheralded Aussie golfer Sam Brazel has now joined some of the greats of Australian golf including Peter Thomson, Kel Nagle and Greg Norman in winning the Hong Kong Open.

The 37-year-old birdied the final hole to beat Spaniard Rafa Cabrera Bello by one shot and win his first European Tour title at the UBS Hong Kong Open. 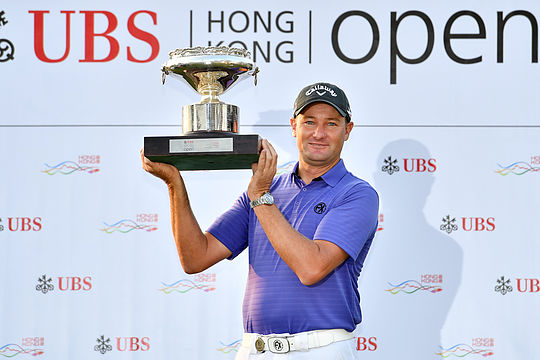 The Lismore-born Brazel entered the week ranked a lowly 480th in the Official World Golf Ranking but went into the final day of just his 17th European Tour event at Hong Kong Golf Club tied at the top of the leaderboard alongside Ryder Cup star Cabrera Bello.

At one point there were six players in a tie for the lead on the back nine but Brazel held off a group with 11 European Tour titles between them, and an eight-foot putt on the last handed him a closing 68 and a 13 under par total.

Cabrera Bello had birded the 16th and 17th to set up a grandstand finish down the last but he could only make a par and finish 12 under as Brazel’s stunning approach set up just the second birdie of the day on the closing hole.

Fellow Australian Andrew Dodt and England’s Tommy Fleetwood were at 11 under, a shot clear of American David Lipsky and two ahead of Danny Willett.

Brazel was visibly emotional as he lifted the trophy and credited a new set of clubs with helping get him over the line, although he revealed that the second shot into the last may not have been as clean as it appeared.

“It’s been a long time coming,” he said.

“I’ve been playing good. It’s just been a bit of a struggle with the old irons and my man, Adam, set me up with a new set of bats, and it’s all sort of turned around. This is the fruit.”

“I’d love to come over to Europe. It will be a great privilege.”

He added: “I was very lucky. That wasn’t the greatest second shot in there but it ended up good and the rest is history.”

Brazel began the day in a share of the lead with Cabrera Bello but the leading duo both turned in 2-over par 36 to allow the chasing pack to close the gap and set up a titanic battle on the back nine.

Cabrera Bello had birdied the third for the fourth time of the week and when Brazel bogeyed the sixth after finding the sand, the Spaniard led by two shots.

The leader bogeyed the seventh after going over the back of the green before a poor chip on the next resulted in a double, and when Brazel went over the back of the ninth for a bogey, it was Willett who led after making birdies on the fourth, sixth, seventh, 12th and 13th.

Dodt had opened with a bogey but turned in 34 after birdies on the fourth, sixth – courtesy of a lengthy putt – and ninth, while Lipsky had a single birdie on the seventh after a stunning approach to turn in 33.