Talk about pressure. Playing on a medical extension, Ryan Brehm headed to the Puerto Rico Open needing to win or secure outright second place to retain his PGA Tour status.

Brehm, playing with his wife on the bag, well and truly nailed the former option, winning by a massive six shots over Max McGreevy at the Grand Reserve Golf Club in Rio Grande. 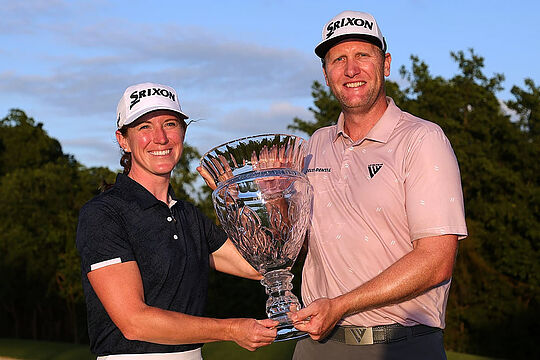 The Brehms are the first husband-wife caddie team to win on the PGA Tour since Patrick Reed and his wife Justine at the 2013 Wyndham Championship.

“Honestly, I wasn’t thinking about the impact of my status or anything this week,” admitted Brehm. “I think that’s probably the real lesson here. I have people on my team that will do that for me.”

“Really, I just need to put my head down and hit good golf shot after good golf shot. That’s my job and I’m going to trust people around me to do their job and they can take care of all those details for me.”

Along with the biggest pay cheque of his career, the 35-year-old earns himself a place in this week’s $20 million Players Championship along with a two-year exemption and a spot in this year’s PGA Championship.

Cameron Percy and Mark Hensby lead the way for the Australians taking a share of 7th place on 11-under. The top-10 finish is Hensby’s best result on the PGA Tour since a T6 at the 2015 Barbasol Championship.