Brendan Jones back to his best with ANA Open win

Bouncing back from wrist surgery in 2013 has been a slow and frustrating process for 41-year old Brendan Jones however the wait has definitely been worth it, with the Canberra resident holding off the fast finishing Yuta Ikeda and Ryo Ishikawa to take out the ANA Open in Japan.

The NSW south coast product who now makes his home in the nation’s capital, claimed his 14th Japan Tour title by a single stroke after taking a two-stroke overnight lead into the final day’s play on the island of Hokkaido. 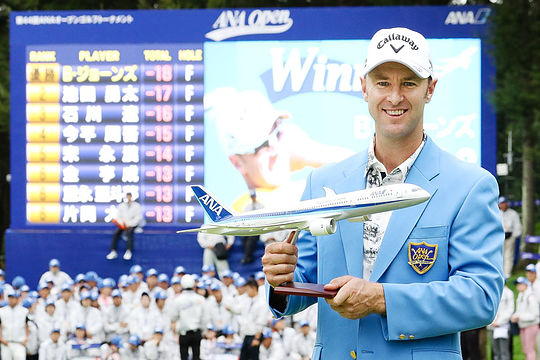 However, the crucial final holes made all the difference with Ikeda bogeying the 18th hole to open the door for the Australian who, courtesy of a critical birdie at the 17th, only needed to par the final hole to claim victory.

Ikeda’s final round 67 was good enough for second place ahead of defending champion Ishikawa (68), who finished at 16-under to maintain his hot streak of form over the past few events following his own return from an injury layoff this year.

NSW’s Won Joon Lee was the next best of the Australians although his tied 19th place would be somewhat disappointing to him, having been placed inside the top-five at the halfway mark of the tournament but ‘only’ managing to shoot even par at the weekend.

A former winner of this event, Kurt Barnes finished tied 26th at 7-under while Brad Kennedy (T40), Adam Bland (T52) and Scott Strange (T60) rounded out the Australian challenge.

The Japan Tour heads to Osaka for the playing of the Asia-Pacific Golf Championship Diamond Cup which will feature an expanded contingent of Australian players, courtesy of the event’s co-sanctioned status with the Asian Tour.