Two closing birdies to card a 5-under-par second round was enough for Brett Rumford to take the half-way lead of the Western Australian Open championship being played at Royal Perth Golf Club.

Rumford is at 9-under-par and leads by two from fellow West Australian Scott Strange and overnight leader Adam Crawford. 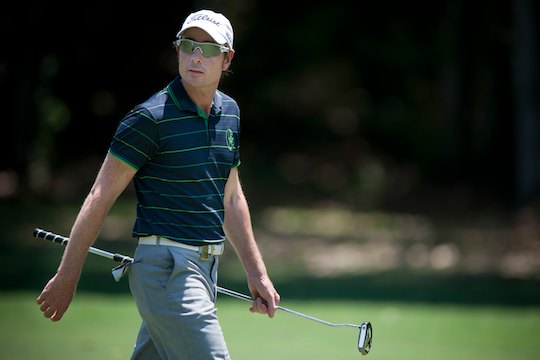 “It’s just good to give myself the opportunities, obviously there are still a lot of dangers on 17 and 18 but if you can get some good drives away you can capitalise,” said Rumford, a three-time winner on the European Tour.   “It’s an exciting finish, 15 and 16 are tough holes if you don’t get your driver in position, but there are plenty of birdies out there if you are patient enough and I was rewarded over the last two holes.”

Strange posted a 3-under 69 to be tied second with Crawford at 7-under the card but feels his game wasn’t up to its best.   “I played quite poorly to be honest,” said Strange.

“I scrambled pretty much for the first 12 or 13 holes and managed to make a few putt coming home for birdie. Apart from that I was chasing my tail for most of the day.”

Both currently sit in a tie for 4th position with Nick Cullen, Kim Felton at 6-under.

Watt last week won the Keperra Bowl and has continued his fine run with opening rounds of 70-68 with Goss, a quarter-finalist at this year’s US Amateur, carding a 72 and a second round 66 – a new course record at Royal Perth.

“I had no idea, I thought the course record would be a bit lower but then I didn’t realise there had been course layout changes, so I am pretty excited,” said Goss.

“I am only a couple behind the leader so I think I have definitely got a chance with how I played today, hopefully I can continue on over the next couple of days.”

The cut came in at 1-over with 50 professionals and 6 amateurs through to the weekend.