Kris Broberg had earned his European Tour card in a brilliant manner by winning four times in 2012 on the secondary Challenge Tour.

Now the Swede is a European Tour champion claiming a long overdue first European Tour title at the BMW Masters with a dramatic and eventual tearful play-off victory by holing a long birdie putt over American Patrick Reed. 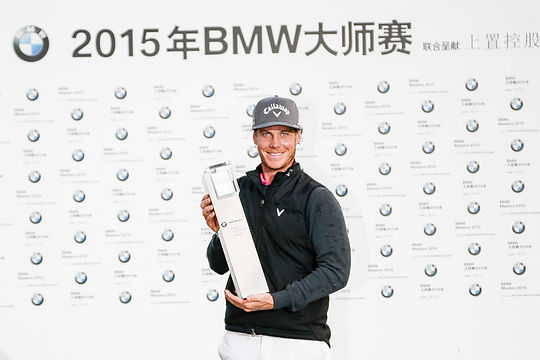 Broberg came into the final round two shots off the lead but turned in 33 to hold a share of top spot and a single birdie on the back nine got him to 17 under.

Playing partner Reed had been off the pace but picked up four shots in four holes from the 13th, including a spectacular eagle on the 15th, to move into the box seat and take a one shot lead onto the 17th tee.

But he dropped a shot on the 17th and as the chasing pack failed to close in, the leading duo parred the last to send the tournament to a two man play-off up the 18th.

Reed put his second shot into the bunker and although he played an excellent recovery for par, he could only watch on as Broberg rolled in a 15-foot putt down the hill to add a European Tour title to his four Challenge Tour triumphs.

“That’s a dream come true. I’ve worked so hard all my life for this,” said Broberg.

“I didn’t trust myself, a few weeks ago; I could never win here. I was just so down, and I’m so happy right now.”

“When I won on The Challenge Tour – once in a play-off in Norway – the players out there are really, really good and this field is just a really good field.”

“So I’m just happy to beat all of them. This means a lot to me.”

Brobeg was full of praise for Reed, who pushed the 29-year old all the way before eventually succumbing to the Swede at the 18th green.

“His short game was unbelievable all day,” he said. “I’m playing really good the front nine and I was struggling a bit, a little nervous on the last few holes. The four last holes I was really, really nervous.”

“I get to the play-off and I saw him hit it right. And I hit it a really good drive on the left side and thought, ‘here is my chance, I want to get by the trap’.”

“I hit a good nine iron up to four or five metres from the hole and was so happy.”

The third event of The Final Series went to a play-off for the second consecutive season following Marcel Siem’s dramatic chip-in win last year and the closing round was full of drama once again.

Thongchai Jaidee had begun the day with a one shot lead and he had a putt on the last to force his way into the play-off, as did Byeong-hun An, but both men had to settle for a share of third at 16 under alongside Lucas Bjerregaard and Henrik Stenson.

Justin Rose was a further shot back alongside countryman Paul Casey with Julien Quesne and Søren Kjeldsen, who shot a low round of the day 64, at 14 under.

With Race to Dubai leader Rory McIlroy not present in Shanghai, the week presented an opportunity for some of the chasing pack to overtake the Northern Irishman heading into the season-ending DP World Tour Championship, Dubai.

But none of them could, with closest rival Danny Willett finishing in a tie for 28th at seven under and closing the gap to just 1,613 points.

Marcus Fraser and Scott Hend were the only Australians to make the weekend cut and finished in 13th and 17th place respectively.