American Dustin Johnson holed a brilliant chip shot for an eagle two just three holes from the finish to set up a three shot victory in the WGC – HSBC Champions event in Shanghai.

Johnson went into the final round of the $8.5m event leading by three and despite being overhauled by both England’s Ian Poulter and Northern Ireland’s Graeme McDowell over the outward nine Johnson birdied 13 and 14 and after eagling the 16th he then birdied the 17th for a popular victory. 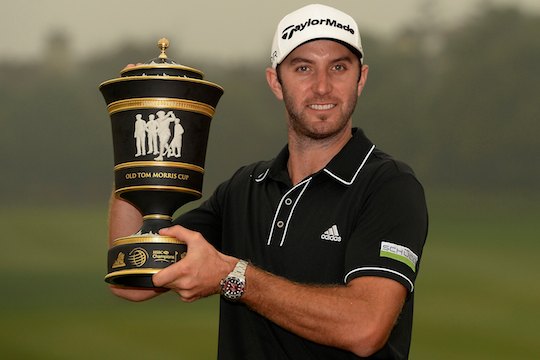 It is the 29-year old Johnson’s first victory since his very first event of 2013 when he captured the season-opening Hyundai Tournament of Champions in Hawaii.

Johnson collected a first prize cheque for $1.4 million to take his earnings this year to $4.4m while he will also move from 23rd to 12th on the World Rankings.

And the Myrtle Beach golfer has leaped from 18th to third (TBC) on the US Ryder Cup points table.

Speaking at the trophy presentation, Johnson said: “I didn’t get off to the best start and Ian Poulter and Graeme McDowell got off to great starts and put a lot of pressure on me, but I am swinging well and putting well so I thought just stick to my game plan and play the golf course how I want to play it and it’s going to come.”

“The last few holes here you can make some birdies. It was a lot of fun out there, it was a good match from both of them. They put a lot of pressure on me but I am really proud of myself and the way I handled it.”

Johnson has not always handled such pressure so well, McDowell famously winning the 2010 US Open at Pebble Beach after Johnson squandered a three shot lead in the final round.

After a triple-bogey on the second hole and double-bogey on the third, Johnson shot a closing 82 and McDowell’s 74 was enough to win by one from France’s Grégory Havret.

“It takes a while to learn that (maturity and patience),” Johnson added. “I wish I would have had some of that a few times a few years ago, but you learn from your mistakes and try to get better from them and I think I showed a lot of patience and a lot of discipline with clubs I picked and shot selection.”

“This is probably my biggest win and hopefully there are better things to come.”

Poulter climbs to fourth in The Race to Dubai as a result of his runner-up finish, while McDowell trimmed Henrik Stenson’s lead to under €150,000 ahead of the season’s penultimate event in Turkey next week.

“I guess it was a good defence,” said 37-year-old Poulter.

“Obviously a little disappointed not to put my hands back on the trophy, but 15 birdies and an eagle at the weekend is some pretty good golf.”

“It’s exciting for the next few weeks ahead, and obviously it’s some good points on the board for Ryder Cup and Race to Dubai.”

“I’m in great form, I really am playing well. The work I’ve done, obviously leading up to this run of tournaments has really worked and I couldn’t be hitting it any better right now and obviously rolling a few putts in.”

First round leader, Rory McIlroy, closed with a 3-under 69 to finish the tournament in equal sixth. McIlroy achieved his goal of moving inside the Race To Dubai Top 60 although he is some 1.5 million point behind leader, Henrik Stenson.

Scott Hend finished the best of the Aussies in equal 21st.