Former British Amateur champion Bryden Macpherson took full advantage of local knowledge to take out the Moonah Links PGA Classic played on the Mornington Peninsula where the 30 year-old played as a junior.

Macpherson, who has won three times on the PGA Tour’s China Series, fired a closing 64 for a one stroke victory over Justin Warren who finished a shot in front of New Zealand’s Michael Hendry in outright 3rd position. 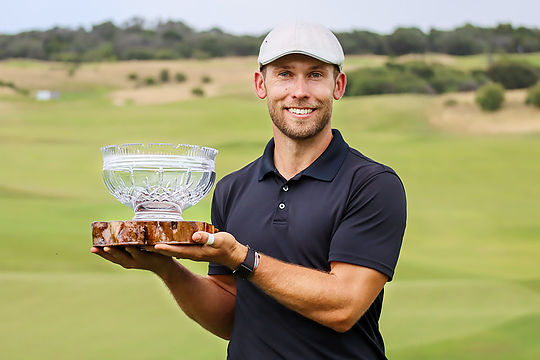 “It’s my fourth professional win and it’s starting to look a little bit more like a career,” said Macpherson.

“Winning at home is awesome, and on the Peninsula even better, but there are much bigger events on this tour. I look forward to trying to compete in them over the next few years.”

Macpherson’s victory comes on the back of some impressive form of late on the Australasian Tour which has so far included top-5 finishes at the Gippsland Super 6 and the TPS Victoria, seeing Macpherson’s world ranking climb from 909th to 441st.

“My game right now is the best it’s ever been,” remarked Macpherson. “If I can work over the next little while at tidying things up, because it still is a little untidy, then I would think there will be some more solid results in the pipeline.”

Earlier Sydney’s John Lyras was in a position to secure his breakthrough professional win following opening rounds of 66-67 to sit as the halfway tournament leader. Officials decided with pending border closures to play the final two rounds with groups of two in carts.

Lyras closed with rounds of 70-71 to finish in a share of 4th position with Dimi Papadatos, and fellow St Michael’s member, Travis Smyth.

The Australasian Tour now moves to Sydney next to the TPS Sydney at Bonnie Doon starting 4th March, a week before the Queensland Open at Pelican Waters Golf Club and cumulating with the NSW Open at Concord Golf Club from 25th-28th March in Sydney.