British Open and the tale of two Tommy Fleetwoods

If he was to make his way in the game coaching players like Rod Pampling, Edwin decided he wanted to do it without people mistaking him for the South African golfing star who has nine majors beside his name. 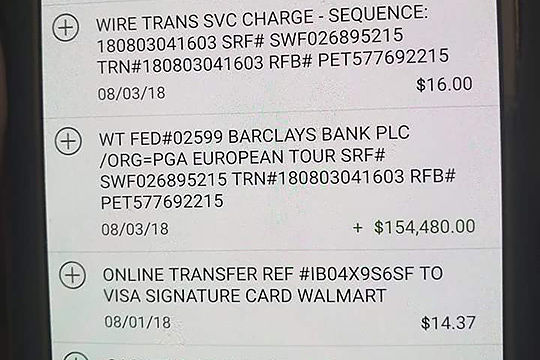 Now it appears there’s a caddie named Tommy Fleetwood who may wish to consider doing the same thing.

And I don’t mean the long-haired Englishman who finished tied for 12th behind Francesco Molinari in the British Open at Carnoustie.

That’s right, there is another Tommy Fleetwood registered with the British PGA by the same name…and that’s where Tommy’s money finished up.

Thankfully the one who didn’t earn that decent pay cheque has owned up to the surprise deposit and left it up to the other Fleetwood, the touring professional, to chase his money.

The other Fleetwood is a 58-year-old caddie who can’t work out why he’s suddenly getting telephone calls from all around the world.

“It was an honest mistake,” Fleetwood said.

“My mother called me to say she’s been getting lots of calls from the media.”

“I tried to get on their senior tour, so that’s how they have my (bank) information.”

Fleetwood told Reuters he was trying to get in touch with English world No.11 to put his mind at ease that the money would be refunded.

The European Tour confirmed the error.

“This was a clerical error which we are resolving and we apologise for the inconvenience caused to both parties,” the European Tour said in a statement.

While it’s uncertain how such an error could occur, sit back and imagine if there were two Francesco Molinaris out there and $1.89 million ended up in the wrong account by mistake.

Now that would take some explaining.

Now let’s get on to the two Zach Johnsons who played in last weekend’s US PGA Championship!